The Remote Designator is a static laser marker turret used by both NATO and CSAT forces in ArmA 3. It was added with the release of the Marksmen DLC.

Controlled with a UAV Terminal, the Remote Designator serves as a semi-autonomous laser designator turret that is fitted onto a retractable stick. Like the AR-2 Darter, it can be disassembled into a backpack and carried by its user to any location.

The advantage of the Remote Designator is that unlike its handheld counterpart, it does not require the operator to remain stationary in order to maintain aim over a target. The user can simply set up the Remote Designator at any location, connect to it via terminal, and then move elsewhere.

Once friendly aircraft are on station and ready to attack the target, the operator can simply switch to manual control over the turret, activate the designator's laser marker, and then return to their previous task.

However, unlike most static weapons, the Remote Designator is completely unarmed and is only designed to mark targets for laser-guided weapons (i.e. GBU-12 bombs used by the A-164 Wipeout). As such, Remote Designators left exposed out in the open can be easily disabled with a burst of small arms fire. Likewise, enemy drone operators can hack into the turret and reprogram it, switching the Remote Designator's "allegiance" to the enemy's side.

It should also be noted that unlike the Mk30A/Mk32A sentry guns, Remote Designators do not mark targets on their own and can only be forced to do so manually by the controller. 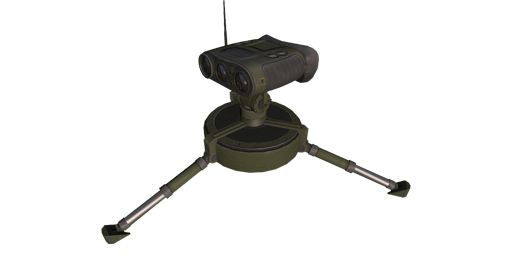 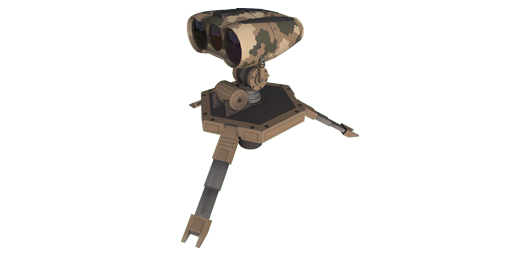 (*) Remote Designators used by both factions are identical to each other in terms of functionality. The only main differences are that their laser marker models are based on their respective handheld counterparts, use differently shaped tripod mounts, and have faction-specific paint finishes.