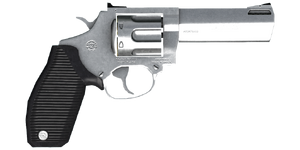 The Revolver is a .45 handgun used exclusively by Takistani Army officers. It was added with the release of the Operation Arrowhead expansion pack.

The Revolver is a double-action revolver chambered to fire .45 ACP ammunition.

It loads from 6-round cylinders, and has a maximum fire rate of up to 120 rounds per minute with a muzzle velocity of 260 m/s. The Revolver cannot mount accessories or muzzle attachments.

The preferred sidearm of Takistani officers, the Revolver is a powerful handgun that has both decent stopping power and range thanks to its use of the .45 ACP round. Compared to the M1911, it has arguably better ironsights that are easier to aim with as well. In the hands of an expert, the Revolver can be used to accurately hit targets at an impressive (at least for handguns) distance of approximately ~ 100 metres.

However, its greatest drawback stems from its very low base rate of fire. Because it uses a double-action operation, the Revolver takes twice as long to fire before the round leaves the chamber.

As a result, the Revolver is more or less a symbolic weapon for show rather than a weapon that would be useful to carry in close quarters. Semi-automatic handguns like the M1911 or the Makarov, will always be more effective in actual combat scenarios.

Both Revolver variants only support one type of "magazine". It requires one free secondary inventory slot to carry:

6-round cylinder loaded with .45 ACP ammunition. Does not contain any visible tracers.