WIP: This page is currently a Work-In-Progress. Information contained in this article is either incomplete or missing and is subject to review.

Robinson was a minor character in ArmA 3's The East Wind campaign.

A member of the Combat Technology Research Group (CTRG), a multi-national NATO black ops unit, Robinson was subordinate to Lieutenant James of Group 14.

For the duration of Group 14's deployment to the Republic of Altis and Stratis, he supported the local resistance movement against the CSAT-backed hardline regime of Georgious Akhanteros. However, Group 14's main goal was to retrieve a CSAT weapon of mass destruction known only by its codename of "Project Eastwind".

Robinson served as the team's grenadier and went by the radio callsign of Ice-3. 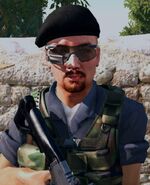