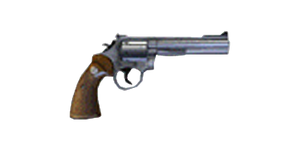 The S&W is a .357 handgun used exclusively by U.S. military pilots in ArmA: Cold War Assault.

The S&W is a double-action revolver chambered to fire the .357 round.

It loads from 6-round cylinders and can attain a fire rate of only 200 rounds per minute. The S&W retains a muzzle velocity of 380 m/s and has an effective range of up to 100 metres.

The S&W is the primary sidearm of U.S. helicopter pilots. It is the most powerful handgun in Cold War Assault, with a single hit to the chest being more than sufficient to outright kill the target. It is also one of the most accurate sidearms and rivals the 92F while retaining greater stopping power.

For all of its strengths however, the S&W also has two major flaws, one being its fire rate which - because of its double-action operation - results in there always being a small delay before the round actually leaves the chamber. This is what causes the S&W to have its notoriously slow rate of fire.

The second is its pitiful ammunition capacity. Since the S&W can only load from six-round cylinders, the user will be forced to reload frequently. Combined with its arduously slow fire rate, this renders the S&W virtually useless compared to other sidearms in close quarters, as missing even a single shot can result in disastrous consequences.

The S&W is restricted to loading only one type of "magazine". It requires one free inventory slot to carry:

6-round cylinder loaded with .357 ammunition.