The S1203 is a minibus used by Takistani civilians and emergency services in ArmA 2. It was added with the release of the Operation Arrowhead expansion pack.

The S1203 is a minibus that uses a four-cylinder engine with a cab-over layout.

Features
It is available in two variants; the baseline, unmodified van/minibus model, and an ambulance model with its rear seats removed to make way for medical stretchers.

Introduced in 1968, this outdated but trusty workhorse is still favoured by large Takistani families and merchants.

Some S1203s are also converted for use by emergency services, acting as rudimentary ambulances to quickly ferry injured patients.

Crew Capacity
Unmodified S1203s provide enough seats for both the driver and up to five passengers. 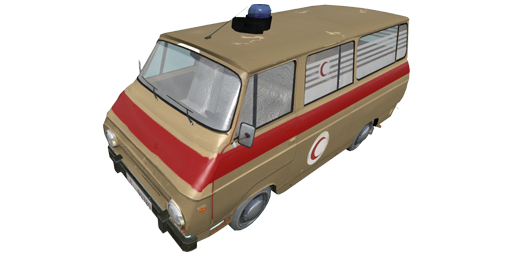 It has a reduced transport capacity and is limited to ferrying just three passengers at a time; one of whom sits in the front seat while two lie in the back on the stretchers. However, wounded civilians and soldiers can heal themselves by approaching and "using" the vehicle.

The engines can only survive up to 10 points of damage before failing. A damaged engine will prevent the S1203 from being able to attain its top speed.

The fuel tank can only take a meagre 2.8 points of damage before rupturing. Incurred damage will cause the S1203 to gradually leak fuel over time.

Each tyre can incur just 4 points of damage before bursting.