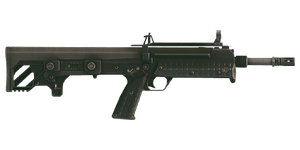 The SDAR is a 5.56 mm underwater assault rifle used by NATO, CSAT and the AAF in ArmA 3.

The SDAR is a selective-fire, bullpup assault rifle that is chambered to fire the 5.56×45 mm NATO round.

It can toggle between a three-round burst, semi-automatic and full auto fire modes, and has a muzzle velocity of 270 m/s when loaded with dual purpose ammunition. Unlike most assault rifles, it cannot mount any optical sights or be fitted with muzzle attachments.

Carried by the combat divers of each main faction, it is the only dual purpose weapon in ArmA 3 which can be used on both land and underwater.

It accepts regular 5.56 mm NATO STANAG magazines which allows it to be employed against surface targets up to approximately ~ 250 metres. When submerged underwater, the user can instead feed the SDAR with its dedicated 20-round box magazines, which are loaded with supercavitating ammunition. These supercavitating rounds are the only source of damage that the user can inflict upon enemy divers without resorting to explosives.

However, the SDAR's utility outside of the water is sharply diminished by its lack of support for mounting attachments. Although its ironsights are not particularly unergonomic (nor are they overly obstructive), its inability to mount magnified optics can make engagements beyond 300 metres difficult. Furthermore, it cannot be suppressed and is therefore not very useful for missions that require a stealthy approach.

Lastly, when fired underwater the SDAR's supercavitating rounds still only possess an effective range of approximately 30 metres. Beyond that distance, they will lose most of their velocity and become effectively useless against any target.

The SDAR supports being loaded with seven types of magazines. Of the seven, only 20-round DP box magazines enable the SDAR to fire underwater; every other magazine can only be used while the SDAR is above water:

Dual-purpose magazine loaded with supercavitating 5.56 mm rounds. Does not contain any visible tracers.

Has a total weight of 8 "mass" units.