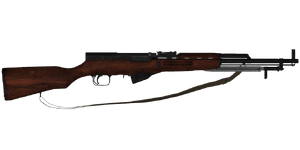 The SKS is a 7.62 mm carbine used by both the PAVN and Viet Cong guerillas in ArmA 3. It was added with the release of the S.O.G. Prairie Fire Creator DLC.

The SKS is a self-loading semi-automatic carbine that is chambered to fire the 7.62×39 mm round. It uses a short stroke gas piston and a tilting bolt.

It loads exclusively from 10-round stripper clips, and can reach fire rates of up to 600 rounds per minute with a muzzle velocity of 735 m/s.

The SKS is able to mount a magnified telescopic sight (interchangeable with the M91/30) that has a zoom of 3.5x. Sound suppressors cannot be fitted onto the muzzle, though a bayonet spike can be attached onto the barrel. 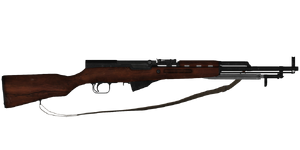 The GL variant has a slightly extended barrel that is fitted with a muzzle adapter capable of loading and firing 22 mm rifle grenades.

It features a ladder sight which can be adjusted between three preset ranges: 50 metres, 75 metres and 100 metres.

However, it should be noted that the GL variant is heavier than unmodified SKS carbines and is no longer able to mount its telescopic sight or bayonet spike.

The SKS is capable of loading two types of "magazines". Variants fitted with a muzzle adapter will be able to mount rifle grenades that use explosive, non-lethal, or less-than-lethal (LTL) fillings:

10-round stripper clip loaded with 7.62 mm ball ammunition. Has a weight of 4 "mass" units.

Every fourth round fired will be a visible tracer. Only the last four rounds of the clip will consist solely of tracers.

Aside from all ten rounds of the clip comprising entirely of visible tracer rounds, the clip remains statistically identical to regular clips.

22 mm rifle grenade fitted with a fragmentation warhead. It has a weight of 4 "mass" units.

It has a timed fuse that will detonate 4.7 seconds after the grenade is fired. The warhead has a minimum fuse distance of 6 metres and a blast radius of 8 metres.

22 mm rifle grenade that uses a high-explosive anti-tank (HEAT) warhead. It has a weight of 8 "mass".

The HEAT grenade's damage output is significantly greater than that of M60 FRAGs but has much smaller blast radius of 2 metres. The M60 FRAG utilises an impact-based fuse and has a minimum arming range of 6 metres.

22 mm rifle grenade with a white phosphorous (WP) filling and an impact-based fuse. It weighs a "mass" of 8 and has a minimum fuse distance of 6 metres.

The explosive component of the warhead can potentially inflict lethal damage if a direct hit is scored on the target. The rest of the warhead (its WP contents) will instantly ignite and burn any organic targets within the 8 metre blast radius.