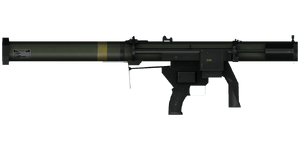 The SMAW is a reloadable, shoulder-launched, unguided, 83 mm rocket launcher.

The SMAW was the primary medium anti-tank weapon wielded by U.S. Marine weapon teams operating in Chernarus at the height of Operation Harvest Red. It is designed to be a rugged weapon that packs the same amount of firepower as the lighter M136, while being more versatile and capable of tackling non-armoured vehicle threats.

The SMAW's HEAA rockets are optimised to take on medium armoured vehicles like the Russian BMP-3 Infantry Fighting Vehicle. HEDP rockets on the other hand, have less penetration but have a much larger blast radius compared to the standard HEAA rocket, and are designed to be used against infantry, buildings, and softer-skinned vehicles such as the Vodnik or BTR-90 IFV.

In terms of capabilities, the SMAW is almost identical to its U.S. Army counterpart; both have a magnified optic for aiming, have an almost identical diameter (munitions-wise), and have two types of rockets designed for either anti-vehicle or anti-personnel/structure use.

However, the SMAW's rockets are lighter to carry as they only take up two inventory slots. The MAAWS on the other hand, require three slots and limits its user to being able to make use of two per person (without a backpack or assistant). A SMAW operator can carry up to three rockets at once while having the same number of slots available for their primary weapon.

But just like the MAAWS, the SMAW is not designed to be used against Main Battle Tanks or any other heavily armoured ground vehicles. The SMAW's HEAA warhead is not powerful enough to penetrate the thick armour of modern MBTs such as the T-90. In the case of the latter, it is strongly advised to use dedicated ATGM launchers instead, as attempting to use the SMAW against such threats will simply result in the user wasting their supply of rockets.

The SMAW can load and fire two types of rockets. Both occupy two inventory slots apiece:

The SMAW's HEAA rocket is designed to pierce through the armour of heavy IFVs. It can also be used to bring down fortified structures that would otherwise be resistant to non-AT munitions and explosives.

Because HEAA rockets are designed to be used exclusively against vehicles, the warhead has a very tiny splash radius on impact (in spite of the deceptively large visual effect) and will barely inflict any damage to infantry targets unless a direct hit is scored.

The HEAA rocket has an effective range of up to 550 metres and an absolute maximum of 800 metres. It has an initial velocity speed of 250 m/s and can reach a top in-flight speed of 750 m/s. The warhead has a blast radius of just 1.2 metres.

The SMAW's HEDP rocket is a multi-role munition. It can be brought to bear against both infantry and vehicles thanks to the large splash radius of its warhead. A downside of this is that its penetration power is greatly reduced, and will be unable to inflict much (if any) damage on heavily armoured vehicles.

HEDP rockets have an effective range of up to 550 metres and an absolute maximum of 800 metres. It has an initial launch velocity of 250 m/s and can reach speeds of up to 750 m/s mid-flight. The warhead has a blast radius of 12 metres.