The SPAR-16 series are a family of modular assault rifles used by several BLUFOR, REDFOR and INDFOR factions in ArmA 3. It was added with the release of the Apex DLC. 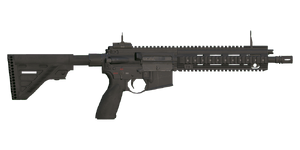 The SPAR-16 is a 5.56 mm assault rifle used by several BLUFOR, REDFOR and INDFOR factions in ArmA 3. It was added with the release of the Apex DLC.

The SPAR-16 is a short-stroke, gas piston-operated assault rifle with a rotating bolt that forms the baseline model of the SPAR-16 family. Along with its sub-variants, it is chambered to fire the 5.56×45 mm NATO round.

It loads from 30-round STANAG magazines, and can attain a fire rate of up to 857 rounds per minute with a muzzle velocity of 800 m/s. The SPAR-16 accepts accessories on its top, side and underbarrel rails, and suppressors can be fitted onto its muzzle.

Out of all its contemporary counterparts, the SPAR-16 is undisputedly the most accurate assault rifle by far. It has minimal recoil even when firing on full auto, and its low dispersion results in the SPAR-16 being significantly more precise than the MX. Furthermore, it completely outclasses the Type 115 at medium-long distances (between ~ 420 and upwards of 550 metres).

The main drawbacks to the SPAR-16 stem from its somewhat lacklustre rate of fire and usage of regular 5.56 mm ammunition as opposed to specialised/larger calibre rounds. The first prevents it from being able to output as many rounds in close quarters, while the latter necessitates that the user expend more rounds per target on average.

This can become particularly noticeable if the target is wearing body armour or a ballistic-resistant outfit, and is positioned further than 500 metres away from the shooter. In contrast, a 6.5 mm-chambered rifle will require less than half of what it would take the SPAR-16 to fatally wound an enemy. 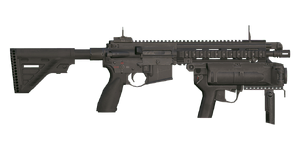 The SPAR-16 GL is a 5.56 mm assault rifle used by several BLUFOR and INDFOR factions in ArmA 3. It was added with the release of the Apex DLC.

The SPAR-16 GL is a modified version of the baseline SPAR-16 model that has a grenade launcher attached to it.

As with its parent model, it is also chambered to fire the 5.56×45 mm NATO round while the underbarrel grenade launcher can fire 40 mm high-explosive (HE), less-than-lethal (LTL) flares, and non-lethal smoke grenade rounds.

It is completely identical to the baseline variant stat-wise. The sole difference is that it cannot fit accessories to its underbarrel rail as the position is occupied by the GLM attachment. For aiming, the GLM utilises a leaf sight that can be zeroed up to a maximum distance of 400 m.

Because it shares the same characteristics of the baseline model (aside from being unable to mount underbarrel accessories), it is just as accurate at medium-long ranges but also shares the same drawbacks with the baseline SPAR-16. Examples being its average rate of fire, and usage of relatively weak 5.56 mm ammunition as opposed to specialised/larger calibre rounds.

The GLM is also less ergonomic to aim with since it only uses a simple leaf sight. Its conventional NATO/CSAT counterparts on the other hand, have quadrant sights with red dots fitted that are much easier to aim with. 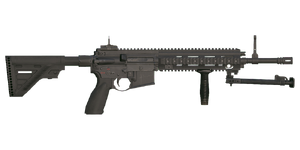 The SPAR-16S is a 5.56 mm light support weapon used exclusively by CTRG operatives in ArmA 3. It was added with the release of the Apex DLC.

The SPAR-16S is a specialised variant of the baseline SPAR-16 assault rifle model. Just like its parent model it is also chambered to fire the 5.56×45 mm NATO round.

It loads from 150-round drums as opposed to standard 30-round magazines (though it can still accept the latter) and has the same rate of fire - the only difference being that it has a higher a muzzle velocity of 880 m/s. The SPAR-16S shares the same ability to mount accessories on its top, side and underbarrel rails, and can also be fitted with muzzle attachments.

Unlike its conventional NATO and CSAT LSW counterparts, the SPAR-16S is the most accurate of the three weapons (it is even more accurate than the baseline SPAR-16).

Along with having less dispersion at medium-long ranges, it is only just slightly heavier to carry than CSAT's CAR-95-1 while having the highest magazine capacity of the three (150 rounds versus the 100 rounds of the MX SW/CAR-95-1).

But as with its assault rifle parent, the SPAR-16S' downsides stem from having the same unchanged rate of fire and being forced to chamber conventional 5.56 mm ammunition. This largely negates the additional 50-round advantage of the SPAR-16S against targets at longer distances since enemies wearing body armour will require several more shots to kill (assuming that the shooter doesn't miss).

All variants are capable of using any of the following finishes:

For grenade rounds usable with the GLM, refer to its dedicated article here.

All variants of the SPAR-16 support being fed with either 30-round STANAGs or 150-round drums. They are fully interchangeable between each variant and other 5.56 mm NATO-chambered firearms (EXCEPT for the drums).

They are all available in either a Black or Sand finish; only the drums possess a third Khaki-coloured finish:

Identical to the baseline STANAG, but the last four rounds consist of yellow tracers instead.

Contains 30 rounds worth of visible red tracer ammunition. Identical in all other aspects to regular STANAG magazines.

Contains 150-rounds worth of 5.56 mm NATO ammunition. Note that rounds fired from this magazine specifically have a slightly higher initial velocity of 930 m/s instead.

Unlike 30-round STANAGs, drums have a total "mass" of 30 units instead. Only the last four rounds of the drum consist of visible red tracers.

Drum with a full load of visible red tracer rounds.