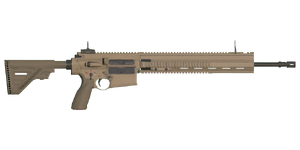 The SPAR-17 is a 7.62 mm designated marksman rifle used by both CTRG operatives and NATO recon units in ArmA 3. It was added with the release of the Apex DLC.

The SPAR-17 is a selective-fire, short-stroke, gas piston-operated battle rifle with a rotating bolt that is chambered for the 7.62×51 mm NATO round.

It loads from 20-round magazines, and can attain a fire rate of up to 600 rounds per minute on full auto with a muzzle velocity of 900 m/s. The SPAR-17 accepts accessories on its top, side and underbarrel rails, and can also mount attachments onto its muzzle.

Accuracy-wise, the SPAR-17 is on par with both the Rahim and the Mk-I EMR. Its greater muzzle velocity also means that the SPAR-17 has slightly more range than the Rahim.

Compared to the Mk18 ABR, it has less recoil and handles marginally better while firing on full auto. But as with all 7.62 mm rifles, the main downsides to the SPAR-17 are its low magazine capacity and long barrel; both of which make it ill-suited for use in close quarters.

The SPAR-17 can only load one type of magazine: