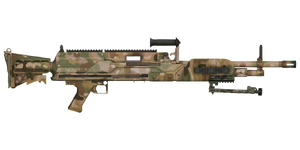 The SPMG is a .338 general-purpose machine gun used exclusively by NATO forces in ArmA 3. It was added with the release of the Marksmen DLC.

The SPMG is a gas operated, long-stroke piston operated medium machine gun that is chambered for .338 Norma Magnum.

It feeds from 130-round belts stored in cloth pouches and can achieve a fire rate of up to 500 rounds per minute, with a muzzle velocity of 807 m/s. The SPMG can be fitted with accessories on its top, side and underbarrel rails, as well as muzzle attachments.

The SPMG's recoil can be easily managed, and is relatively light for a full-size GPMG while being very accurate at all ranges. In fact, the SPMG's .338 round provides the operator with an GPMG that has accuracy on par with marksman rifles like the Cyrus and the MAR-10.

When paired with magnified optics like the AMS, the effective range of the SPMG can essentially extend out to an impressive distance of 2,000 metres, allowing the user to technically fulfil both sniper and machinegunner roles.

Furthermore, the SPMG's .338 round demonstrates excellent barrier penetration. Steel and corrugated iron walls offer no resistance, and even moderately thick stone/brick walls are unable to stop the SPMG's rounds from punching through. It can clear drivers and occupants out of MRAPs without damaging the vehicle, other than potentially bursting its tyres or disabling the turret.

In terms of stopping power, its .338 rounds are powerful enough to outright kill armoured foes in one or two hits regardless where they are struck even at long distances.

However, the SPMG does suffer from having a very low rate of fire. Unlike its CSAT counterpart, the SPMG is unable to lay down fire as quickly due to its pitiful cyclic fire rate of only 500 RPM. The Navid on the other hand, is capable of reaching anywhere from 705 up to a maximum of 1,500 RPM (on burst mode). Though in practice, even this drawback is minor at worst, given that the SPMG's high accuracy and lethality can effectively compensate for its lower fire rate.

Belt pouch with one (visible) red tracer for every five rounds. The last five rounds will always consist of tracers.