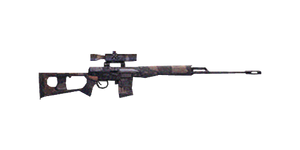 The SVD is used by both the Soviet military, as well as in limited numbers with the Nogovan Partisans in ArmA: Cold War Assault.

The SVD is a gas operated, semi-automatic sniper rifle that is chambered to fire the 7.62×54 mm round.

It loads from 10-round curved magazines, is capable of attaining a fire rate of up to 200 rounds per minute and has a muzzle velocity of 900 m/s. The SVD is accurate at a distance of up to 800 metres.

The SVD is the Soviet counterpart to the American M21 sniper rifle. Like the M21, the SVD is also a semi-automatic sniper rifle that excels in attacking targets from long ranges. Its telescopic sight has a magnification strength of 4x, which lets its operator see targets more clearly from a safe distance.

Compared to the M21, the SVD has greater stopping power over long ranges. Its main drawback is the small capacity of its magazine, which has 10 rounds less than the M21. So in spite of its higher rate of fire, every single round counts and shouldn't be wasted. The other issue is its usage of a fixed magnification scope (the SVD's scope has a fixed magnification strength and cannot be zoomed in with). 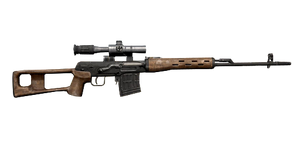 The SVD Dragunov is used exclusively by SLA forces in ArmA: Armed Assault.

The SVD returns in Armed Assault and serves as the standard-issue weapon of SLA snipers.

It still loads from 10-round curved magazines, and has a maximum fire rate of up to 600 RPM with a muzzle velocity of 900 m/s. The SVD is almost always fitted with the PSO telescopic sight.

Compared to the American M24, the SVD has identical dispersion against long distance targets but has a low-powered PSO scope that is more useful in urban areas. Consequently, it isn't nearly as easy to aim with at longer ranges and will fall off sharply against targets located beyond ~ 700 metres.

10-round curved magazine. Does not contain any visible tracers. 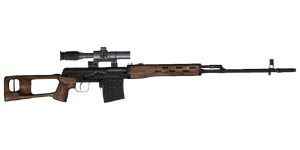 The SVD Dragunov is used by several BLUFOR, OPFOR and Independent factions in ArmA 2.

The SVD once again returns in ArmA 2 and now serves as the sniper weapon of several factions.

It still loads from 10-round curved magazines but has a reduced fire rate of only 400 RPM. Its muzzle velocity has also been reduced to only 870 m/s as opposed to 900, but is still fitted with the PSO telescopic sight as standard.

An alternate variant with the NSPU night vision scope attached is also available. The SVD cannot be suppressed or be fitted with laser pointers/flashlights.

With an effective range of between 800 metres and up to a maximum of 1,200 metres, it can hit distant targets with much better accuracy than the DMR while being able to fire as rapidly (as the shooter can pull the trigger) like the Mk17 Sniper due to being a semi-automatic weapon.

Compared to its American-made counterparts, it is arguably the superior weapon in that respect. Because of the low-powered zoom of the PSO scope, the SVD also performs well in built-up areas as a designated marksman rifle.

However, when it comes to absolute precision at long ranges (800 metres or more) then the SVD still falls off significantly compared to dedicated sniper rifles like the M24. Since the SVD also lacks any models that are fitted with riflescopes with variable magnification or enhanced vision modes, its ability to effectively engage targets at those ranges and lighting conditions is limited at best.

10-round curved magazine. Does not contain any visible tracers.

First person view of the SVD.

Russian snipers armed with the SVD (left) and KSVK (right). Note the ghillie wrap on the SVD. 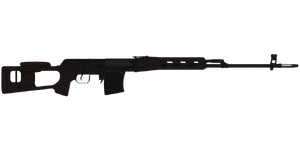 The SVD is used by both Soviet military forces and FIA guerillas in ARMA Reforger.

Reforger's SVD returns once more as the standard-issue sniper rifle of Soviet and guerilla sharpshooters.

Compared to its ArmA 2 iteration, the SVD now has a higher fire rate of 700 RPM. However, its muzzle velocity has been reduced to only 823 m/s.

SVDs are still unable to mount suppressors, though its scope mount does allow the user to affix the PSO-1 telescopic sight.

If the PSO-1 is removed or is unavailable, the user can opt to manually zero the SVD. Zeroing starts at a minimum of 100 m up to a maximum of 1,200 m, with any adjustments being made in increments/decrements of 100 m.

The SVD can only load one type of magazine:

10-round curved magazine loaded with 7N1 ammunition. Does not contain visible tracer rounds.