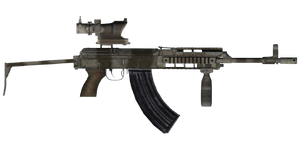 The Sa-58V is a 7.62 mm assault rifle used exclusively by Czech military forces in ArmA 2. It was added with the release of the Operation Arrowhead expansion pack.

The Sa-58V is a gas operated, selective-fire assault rifle that is chambered to fire the 7.62×39 mm cartridge.

It is primarily designed to load its own 30-round curved steel magazines, but can also load the same magazines used by the Russian-made AKM rifle. The Sa-58V can attain a fire rate of up to 600 rounds per minute, and has a muzzle velocity of 710 m/s. It has an accessory rail on top of its receiver for attaching ACOG riflescopes and red dot sights, as well as on its handguard for laser pointers. The Sa-58V cannot be suppressed with muzzle attachments.

A heavy duty weapon, the Sa-58V is the Czech military's alternate counterpart to the BREN family of assault rifles in use by its conventional forces. Though fairly outdated by modern standards, the Sa-58V's ruggedness makes it an ideal weapon for use by Czech special forces units operating deep in the arid hills of Takistan.

To compensate for its age, the Sa-58V features an assortment of accessory rails to mount accessories such as magnified optical sights and laser pointers.

In many respects, it handles quite similarly to the Russian AKM assault rifle but thanks to its rails allowing for optical accessories to be attached, is far more reliable in medium-long ranged firefights. When fitted with the ACOG riflescope for instance, the Sa-58V's effective firing range extends out to almost 550 metres.

Compared to the BREN's 7.62 mm variant, the Sa-58V isn't nearly as accurate, has higher dispersion at distances of beyond 300 metres, and suffers from having slightly more recoil that makes it difficult to control when firing on full auto.

The Sa-58V's main advantage is that its magazine has 10 additional rounds that can fired in a single load, which generally makes it the better weapon for close quarters combat since the operator won't need to reload as quickly, and can keep firing for a little longer. 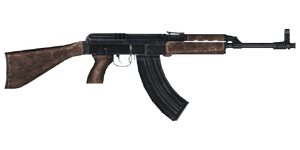 The Sa-58P is simply an older variant of the baseline Sa-58V rifle.

Unlike its modernised iteration, the Sa-58P uses wooden furniture as opposed to metal, and lacks accessory rails to mount optics, the foregrip and miscellaneous accessories.

It is available with either a fully extended wooden buttstock, or with a side-folding metal stock. Both variants do not have optics but can be zeroed up to a maximum distance of 800 metres; unlike their parent model, which uses fixed zeroing ranges of 100 and 300 metres respectively depending on their optic.

Aside from the obvious lack of weapon attachments, there are no other functional or handling differences from regular Sa-58Vs.

All variants of the Sa-58 can load two types of magazines. They each take up one inventory slot:

Standard issue 30-round curved steel magazine. Does not contain any visible tracers.

Operators from the 601st SFG observe a position. Note the team leader on the right armed with the Sa-58V.