The Sa-61 Scorpion is a 7.65 mm submachine gun featured in both ArmA: Cold War Assault and ArmA 2. 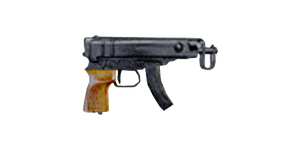 The Sa-61 Scoprion is used by both Nogovan law enforcement officers and Soviet Spetsnaz operatives in ArmA: Cold War Assault.

The Sa-61 Scorpion is a selective-fire submachine gun that is chambered to fire the 7.65×17 mm round.

It loads from 20-round curved magazines, and is able to attain a fire rate of up to 600 rounds per minute with a muzzle velocity of 320 m/s. It has a maximum effective range of just 100 metres.

Compared to the American-made Ingram wielded by the Nogovan Partisans, both weapons are remarkably similar in that they're both compact personal defence weapons that can be carried as sidearms.

Although slightly weaker damage-wise due to firing a rather underpowered cartridge, the Sa-61 serves as an excellent backup weapon that can be used in lieu of other handguns or the Ingram. With the combination of a large magazine size as well as the ability to fire in full auto, it's highly effective in close quarters.

However, just like the Ingram it isn't useful for engaging targets that are further than 100 metres away. This is simply because the Sa-61 has rather poor ironsights and low accuracy, meaning that the user will simply end up wasting ammunition trying to shoot at distant targets.

The Sa-61 can only load one type of magazine. It requires one inventory slot to carry: 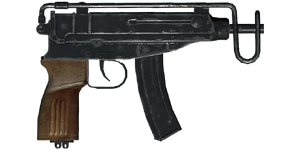 The Sa-61 Scorpion remains unused by any faction in ArmA 2. It was added with the release of the Operation Arrowhead expansion pack.

Returning from Cold War Assault, the Sa-61 mostly remains identical and continues to occupy the user's sidearm slot rather than primary.

It still loads from 20-round curved magazines but can now load 10-round magazines as well. Its fire rate has been increased to 800 RPM, and now retains a muzzle velocity of 318 m/s. The Sa-61 does not support being fitted with any optical sights or accessories and cannot be suppressed.

Like the PDW, the Sa-61 is unique for being one of the only two fully-automatic sidearms that can be used in ArmA 2.

Although this is what would make it seem ideal to carry as a backup weapon, the Sa-61's combination of poor accuracy and the lacklustre damage of its 7.65 mm round make it a terrible choice for use in any situation. Its ability to fire full auto is also made redundant by the fact that it has such a small magazine capacity. Unless there's no alternative, it should be avoided as the PDW is far superior recoil-wise and can also be suppressed.

Scorpions can load two types of magazines. Both only take up one secondary weapon inventory slot apiece:

20-round curved magazine. Does not contain any visible tracers.

Remains statistically identical to regular 20-rounders (aside from capacity).