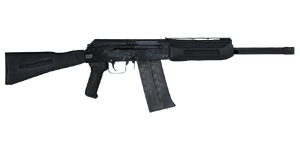 The Saiga 12K is a 12G shotgun used exclusively by the Russian Armed Forces in ArmA 2.

It can load either 8-round slug or pellet magazines and can attain a fire rate of up to 600 rounds per minute, and a muzzle velocity of 396 m/s. The Saiga 12K lacks the ability to mount any accessories or muzzle attachments.

Analogous to the M1014, the Saiga 12K is a high-powered combat shotgun with an effective range of between 60 and up to 200 metres. Both weapons are very similar to each other with their recoil, ammunition capacity, and dispersion being almost identical; the only difference being that the M1014 has a slightly higher maximum range.

However, between the two shotguns the Saiga 12K is generally the superior option as unlike the M1014, it is capable of attaining a higher fire rate. This makes the Saiga 12K much deadlier in close quarters, as the user can quickly fire off two if not three volleys before the M1014's user would be able to fire their second shell.

The Saiga 12K can load two types of magazines. Both require one inventory slot to carry: