The Speedboat is a light patrol vessel used by several BLUFOR, REDFOR and INDFOR factions in ArmA 3

The Speedboat is a compact, twin-engined boat that uses a V-shaped hull.

Armament
It is fitted with a forward-mounted RCWS turret that is armed with a 40 mm automatic grenade launcher. A auxiliary turret is also fitted to the stern of the boat and varies between either a .50 cal heavy machine gun or 6.5 mm Gatling gun.

Controlled by the boat's commander, this RCWS comes pre-loaded with a twin 96-round grenade belts fitted with high-explosive (HE) warheads.

For the rear turret, the HMG has access to four 100-round belt boxes (400 rounds total) while the Gatling gun variant carries only a single 2,000-round linked belt with no spare reloads available.

Features
The Speedboat provides NATO's naval armadas and CSAT special operations units the ability to insert and extract on coastlines, and to patrol/perform maritime interdiction against enemy forces.

Though it is too heavy to be lifted by smaller helicopters such as the WY-55s or the MH-9, Speedboats can still be carried by either the Huron or Mi-290 heavy-lift helicopters.

NATO's Liberty-class destroyers are also capable of storing and deploying Speedboats. They can be lowered/raised from the vessel through the entryways located on both the port and starboard sides of the ship via its internal boat racks.

Mobility
The hull's sleek design enables to it glide through the water with little resistance. It has very good handling and can make sharp turns in the water without needing too much space to manoeuvre.

Drawbacks
It should be noted that the Speedboat relies heavily on both its speed and agility to avoid incoming fire, given that it provides minimal protection for its passengers and crew since it is an open-top boat after all. Prolonged contact against land-based threats should always be avoided unless absolutely necessary, as the Speedboat will not survive for long under heavy fire.

Crew Capacity
Regardless of faction, all variants can transport the same amount of troops and crew. The crew includes the driver, the commander (who doubles as a gunner) and the rear gunner. Up to eight passengers can either sit in the rear and front, or stand up while holding handlebars located on the port and starboard sides of the boat. 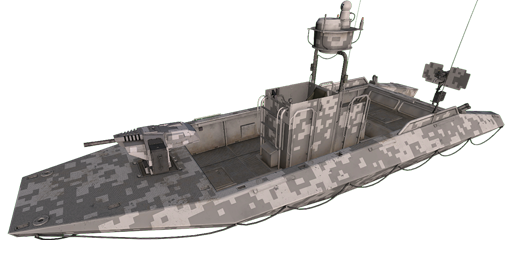 Used by NATO, the AAF and CTRG special operations units.

The commander's front mounted GMG turret is loaded with twin 96-round grenade belts (total 192 grenades) while the rear gunner has access to a Gatling gun with a single 2,000-round linked belt. Only the rear gunner's turret is fitted with a ballistic-resistant gunshield.

NATO Miniguns fire visible red-coloured tracer bullets, while AAF Miniguns are loaded with yellow-coloured tracers instead. Once depleted, the rear gunner cannot reload the gun unless the Speedboat is rearmed at a logistical vehicle. 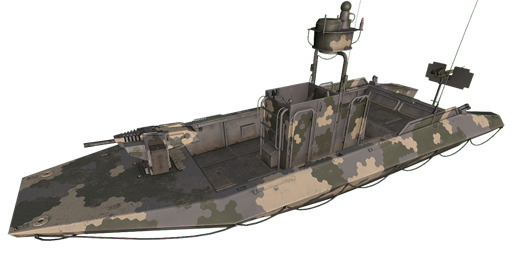 It is functionally identical to the NATO/AAF variant and shares the same front-mounted GMG turret. The sole difference is that this variant's rear turret utilises a .50 cal heavy machine gun fitted with a gunshield.

The HMG feeds from a single pre-loaded 100-round belt box loaded with visible green tracers. The HMG can be reloaded a total of three times as it retains access to a further three boxes in reserve (for a combined amount of 400 rounds).

Both Speedboat variants have base armour values of 400.

The actual body of the boat (not the hull plating) can only withstand 80 points of damage. It receives 200% increased damage from high-explosive (HE) type munitions.

The Speedboat's engine can incur up to 240 points of damage before failing. The engine takes only 20% damage from HE-type munitions, though at least 50% of damage is shared with the Speedboat's main "health" pool.

If damaged: Reduces power output, Speedboat(s) can no longer attain top speed even when tidal conditions are steady.
If destroyed: Instantly immobilises the vessel.

The boat's fuel tank can survive 200 points of damage before rupturing. It takes only 60% damage from HE-type munitions, and transfers 30% of that onto the Speedboat's main "health" pool.

If damaged: Loses a maximum of up to 70% of remaining fuel.
If destroyed: All fuel depleted after several seconds.

The bow-mounted RCWS turret can resist up to 250 points worth of damage. No amount of damage incurred is transferred onto the Speedboat's main "health" pool.

Disabling the turret will prevent the commander from adjusting its rotation, though the grenade launcher itself can still be fired and the camera's vision modes/zoom toggled.

The stern-fitted turret (Minigun/HMG) can only survive a meagre 40 points of damage before failing. No damage is shared with the Speedboat's main "health" pool.

Disabling the turret will prevent it from being rotated but does not stop the weapon(s) from being fired by the rear gunner.

The rear gunner on the Minigun variants do not possess any optics. Only the commander's RCWS and HMG variant's rear gunner retain optics; they retain variable zoom capability and can toggle day, night or black-hot/white-hot thermal vision modes:

NOTE: Although its HEDP grenades function like as if they were purely HE-based, they are actually treated as a HEAT-type munition instead.

It has an effective firing range of 1,200 metres and a fire rate of ~ 349 RPM. It requires 20 seconds to reload a second belt and for dispersion, the GMG is always set to a fixed value of 0.005 rad.

The turret retains an integrated Fire Control System but can only zero onto stationary targets, and requires at least 1 second before it can finish adjusting. Manual zeroing is possible starting at 100 m up to a maximum of 1200 m. It rises in 100 m increments up to 400 m before transitioning to 200 m increments instead (600 m, 800 m, 1000 m and lastly, 1200 m).

NOTE: Only available on the Speedboat Minigun variant.

It can attain a fire rate of up to ~ 1,818 RPM and has a muzzle velocity of 825 m/s. For dispersion, it is always fixed at 0.0115 rad regardless of range. It takes 15 seconds to reload a fresh linked belt for both guns (assuming the Speedboat has been depleted and is rearming at a logistical vehicle).

There is no limit to the turret's horizontal rotation though vertically, it is restricted to a maximum elevation angle of 60 degrees and depression of just 5 degrees. The Minigun 6.5 mm does not have an integrated FCS but can be manually zeroed by the gunner, and retains the same zeroing limits as the RCWS GMG 40 mm.

NOTE: Only available on the Speedboat HMG variant.

It has an effective firing range of 800 metres up to a maximum of 1,500 metres. The Mk30 can attain a fire rate of up to 500 RPM and requires 15 seconds to reload a new belt box. Accuracy-wise, it has a fixed dispersion of 0.00096 rad regardless of distance.

The gun does feature an integrated FCS but is only able to automatically zero on stationary targets, and requires at least 1 second to finish calculating. Manual zeroing is also possible, and has identical zeroing limits as the RCWS GMG 40 mm.