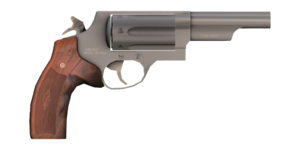 The Starter Pistol is a 10 mm flare gun used by Altian racing marshals in ArmA 3. It was added with the release of the Karts DLC.

This is a premium asset that requires ownership of the Karts DLC.

It loads from 6-round cylinders and has both a fire rate and muzzle velocity of 240 rounds per minute/240 m/s. The Starter Pistol does not support being fitted with any accessories or muzzle attachments.

Designed solely as a non-combat weapon, the Starter Pistol can launch either red or green (harmless) short-range signal flares into the air to mark the start of racing matches. Or alternately, it can also serve as a way of marking locations for friendly forces to see as an improvised flare gun in emergencies.

Both red and green flares are identical aside from their colours. They have a weight of 12 "mass" each:

Pale red coloured flare. The dummy shell will split into three individual and smaller flares 0.9 seconds after being launched.