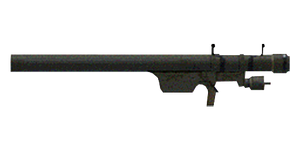 The 9K32 Strela is primarily used by the Soviet military, as well as in limited numbers with the Nogovan Partisans in ArmA: Cold War Assault.

The 9K32 is a portable, surface-to-air launcher that is designed to launch infrared-guided missiles at low-flying and medium altitude aircraft.

It can only load missiles fitted with a high-explosive (HE) warhead, and has an effective range of between 400 and up to a maximum of 1,200 metres. The 9K32 lacks magnified optics and uses a simple ironsight with a cross-shaped reticle instead.

The 9K32 is the Soviet counterpart to the U.S. FIM-92. Both are short-ranged, infrared-guided, man-portable SAMs that are designed to take down helicopters and fixed-wing aircraft alike.

Aside from the obvious visual differences between the two weapons, the 9K32 is completely identical performance-wise to the Stinger. It also shares the same drawback of being excessively heavy to carry; each missile requires six inventory slots at the minimum which restricts the 9K32 to being single-shot only (assuming the user is on the move and cannot resupply). {clr}}

9K32s are limited to loading and firing one type of missile. They require six free inventory slots to carry:

Missiles are always hard launched with an initial velocity of 30 m/s. They take a further three seconds after launch to reach a top speed of 350 m/s in mid-flight. The warhead itself has a blast radius of 2 metres. 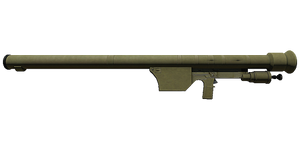 The 9K32 Strela is used exclusively by the SLA in ArmA: Armed Assault.

Returning in Armed Assault, the 9K32 continues to serve as a simple, shoulder-carried fire-and-forget SAM launcher.

Like its predecessor in Cold War Assault, the Armed Assault 9K32 still loads 72 mm missiles fitted with HE warheads, and is mostly identical both function and appearance-wise. The main difference is that it now has an increased maximum lock-on range of 2,500 metres instead.

As the SLA's counterpart to the American FIM-92F Stinger, both are essentially the same capability-wise. The only drawback of the 9K32 is that its HE warhead inflicts slightly less damage, though the difference is negligible given that the 9K32 will still disable most helicopters in a single hit regardless.

9K32s can only be loaded with one type of missile. Each missile occupies six inventory slots:

Missiles are hard launched with an initial velocity of just 5 m/s. They will continue to gain speed 2.5 seconds after launch until they reach a maximum of 800 m/s in mid-flight. Their warheads have a blast radius of 7 metres. 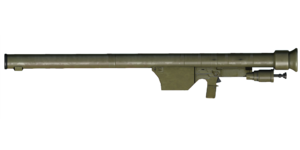 The 9K32 Strela-2 is used by several BLUFOR, OPFOR and Independent factions in ArmA 2.

The ArmA 2 9K32 returns once more and continues to serve as the standard-issue SAM launcher for many more factions.

It is mostly identical capability and function-wise but unlike in Armed Assault, the ArmA 2 9K32 now has a far greater lock-on range of between 2,350 metres and up to a maximum of 4,200 metres.

It serves as a low-tech counterpart to the newer 9K38 Igla SAM. Unsurprisingly, this does mean that the 9K32's outdated IR seeker has very low resistance against countermeasure flares.

Provided that they are outfitted with an Infrared Warning Reciever (IWR) to detect an incoming Strela missile, they can be easily diverted away from most modern aircraft. Even then, most pilots will still be able to see the 9K32's smoke trail which can be easily spotted if they pay close attention to their surroundings.

On top of its extremely poor reliability, its missiles also occupy the same number of inventory slots as its newer counterparts. Overall, this makes the 9K32 a completely useless weapon to use in almost every scenario. Unless there are no alternatives to it, the 9K32 should be avoided in favour of newer generation SAM launchers instead.

9K32s are limited to only one type of missile. Missiles always take up to six inventory slots:

Missiles are hard launched with an initial velocity of 40 m/s. They will continuing gaining speed over a period of 1.5 seconds after launch until they hit a maximum of 580 m/s. The seeker has a 20% chance of losing lock to countermeasure flares, while the warhead retains a blast radius of 8 metres.