The Stryker IAV (full name: Interim Armored Vehicle) is a family of modular armoured vehicles featured in both ArmA: Armed Assault and ArmA 2.

The Stryker is used exclusively by the U.S. Army in ArmA: Armed Assault.

The Stryker is a family of 8x8 armoured fighting vehicles that was incorporated to fulfil the U.S. Army's need for an air-deployable vehicle that would allow its brigade combat teams to mobilise anywhere in the world within 96 hours.

The Stryker served as the mainstay of U.S. Army/USMC motorised infantry platoons operating on Sahrani. Though it lacks the logistical capabilities of the smaller and tracked M113, it makes up for it by providing better protection for its crew members.

For instance, gunners on all variants operate the vehicle's turrets remotely from the safety of the vehicle's interior rather than being exposed on the outside as the M113's gunner is. The Stryker also has a dedicated anti-tank variant that allows it to fight against tanks like the T-72 - a capability exclusive to the Stryker platform.

Mobility
The Stryker's excellent on- and off-road capabilities make it superior to both the 5T Truck and M113 APC in every way. It has smooth handling and can also accelerate quickly even while driving on rough terrain.

Drawbacks
At the same time however, the Stryker's minimal amount of armour plating still leaves it vulnerable to anti-tank weapons. The RPG-7V's PG-7VR grenade can usually disable the Stryker with one or two strikes (or outright destroy it in some cases). Likewise, armoured fighting vehicles such as the T-72 will easily destroy the Stryker with just a single AP shell.

Additionally, only the ATGM model is capable of fighting tanks as the other variants can only provide light fire support against infantry and other unarmoured targets. Even then, the ATGM variant cannot tackle tanks head-on as it is simply too risky due to its lack of armour. It must rely on defilade and flanking if the crew hope to score a hit on the tank.

Crew Capacity
All Stryker variants support a crew of two that consist of the driver and a commander, who also doubles as the vehicle's gunner. The regular troop carrier models can carry up to nine passengers at a time. 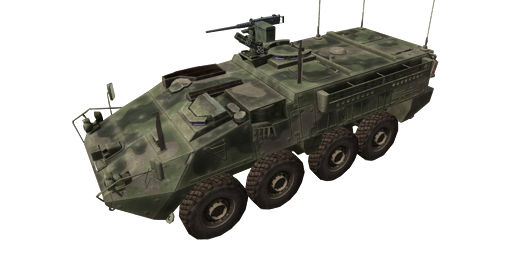 The Stryker ICV is armed with a remotely-operated M2 .50 cal heavy machine gun that is pre-loaded with a single 100-round belt box. It has a further five boxes spare to reload from and has a grand total of 600 rounds.

It can transport up to nine passengers at a time. 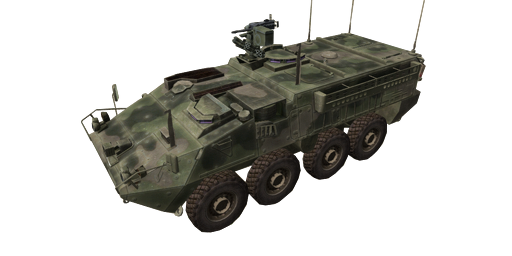 Identical to the baseline variant capability-wise, but is armed with a Mk. 19 40 mm automatic grenade launcher instead.

The Mk. 19 is pre-loaded with a single 48-round belt box loaded with high-explosive (HE) grenades. It has a further three boxes spare for a combined total of 192 grenades. 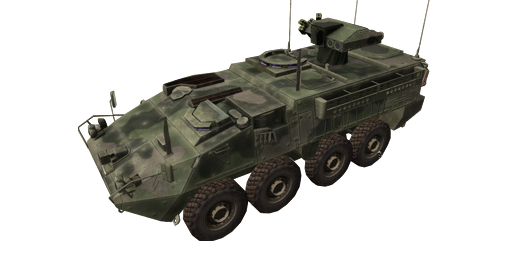 This variant eschews the HMG/AGL turret and replaces it with an M220 TOW launcher instead. The TOW launcher is pre-loaded with two TOW missiles, and carries another eight spare for a combined total of 10 missiles.

It is unable to transport any passengers.

All variants of the Stryker have the identical base armour values of 200.

The Stryker's hull can resist up to 200 points of damage.

The engine can survive 80 points of damage before failure.

The fuel tank can only take 60 points of damage before rupturing.

Each of the Stryker's tyres will burst if they take more than 40 points of damage.

The weapons on all variants are controlled by the vehicle's commander:

NOTE: Only available on the Stryker ICV (M2) variant.

General-purpose .50 cal heavy machine gun. Intended for anti-infantry use, or against unarmoured vehicles and low-flying helicopters.

NOTE: Only available on the Stryker ICV (MK19) variant.

NOTE: Only available on the Stryker ATGM variant.

Anti-tank guided missile launcher. Can use either autonomous or manual wire guidance.

The M220 TOW only has a firing delay of 1 second in-between missile launches, but takes 30 seconds to reload another rack of missiles. It has a minimum firing range of 500 metres up to an absolute maximum of 8,000 metres.

Missiles have an initial launch velocity of 8 m/s and can reach up to speeds of 360 m/s in mid-flight. They can be controlled up to a maximum distance of 8,000 metres. The warheads have a 2 metre blast radius.

The Stryker is used exclusively by U.S. Army forces in ArmA 2. It was added with the release of the Operation Arrowhead expansion pack.

The ArmA 2 Stryker continues to serve in the same role as its Armed Assault predecessor, though it has been expanded with more sub-variants with different capabilities.

Features
It is now available in up to seven variants:

The Stryker family's modularity allows it fulfil multiple roles on the battlefield depending on how it is configured.

Unlike its USMC counterpart, this makes the ArmA 2 Stryker a much more flexible and versatile vehicle that can outfitted to tackle multiple kinds of threats; so as long as the right variant is deployed into battle.

Mobility
When it comes to mobility, the Stryker handles decently both on- and off-road. Since it relies on wheels as opposed to tracks unlike its bulkier IFV cousin, the Stryker can accelerate rapidly and keep pace with M1A1/M1A2 tanks.

Drawbacks
Its main weakness continues to stem from its lack of heavy armour plating, which is only designed to resist small arms fire from calibres of up to 12.7 mm/.50 cal. Not to mention that because slat armour is not actually simulated in ArmA 2, it doesn't react well to damage from rocket-propelled grenades and other anti-tank weapons.

As a result, it really isn't suited for direct combat against other armoured vehicles, and relies more on its speed and mobility to keep out of harm's way. It should also be noted that the Stryker family is not amphibious like the USMC's LAV-25, though fortunately in-game U.S. Army forces generally do not operate in such regions that would require this capability in the first place.

Crew Capacity
The baseline Stryker has a seating capacity of twelve personnel (including the crew). The crew includes the driver, gunner and commander, while the passenger compartment has enough room for a full U.S. Army squad of nine troops. Other variants usually only have enough seats for the driver, commander, and (optionally) a gunner. 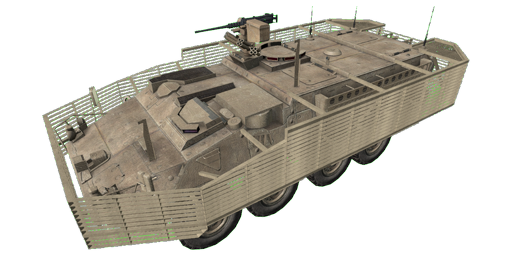 It is armed with a M2HB .50 cal heavy machine gun mounted onto the remote weapons station turret fitted to the roof of the hull. The M2HB is always loaded with a 100 round belt of .50 cal ammunition, and has a further five belts spare.

Can transport up to nine passengers in its rear compartment. 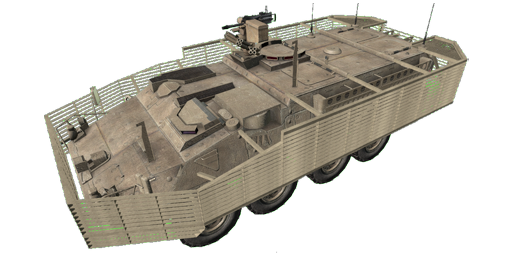 Identical to the M2-armed variant but is fitted with a MK19 40 mm automatic grenade launcher instead.

The MK19 is pre-loaded with a single 48 round belt of 40 mm high-explosive dual purpose (HEDP) grenades, and has a further three belts left in reserve.

Transports the same number of passengers. 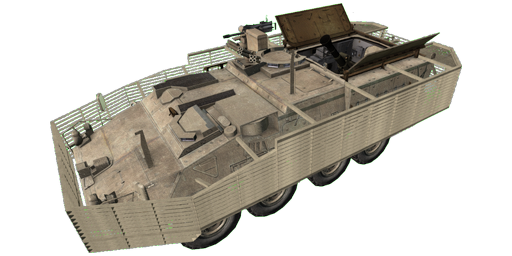 The RWS is still fitted with a 40 mm AGL used on the MK19 variant, but the rear compartment has been refitted with an open-hatch roof to accommodate the M120 120 mm mortar. The M120 mortar can fire up to 24 rounds of 120 mm high-explosive (HE) mortar shells, while the 40 mm AGL has the same number of grenades as the MK19 variant.

It cannot transport any passengers. 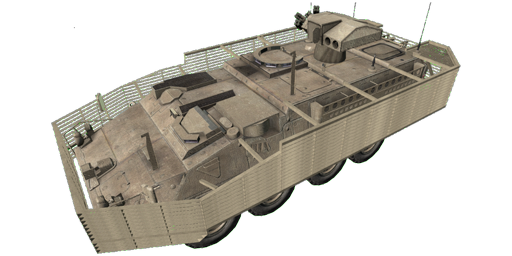 It is largely identical to the M2-armed troop carrier, but the HMG has been replaced with a twin-tubed BGM-71 TOW anti-tank guided missile launcher pod. The TOW pod has two missiles loaded and ready to fire by default, and has a further eight missiles in reserve.

This variant cannot transport any passengers, and has a crew that consists of just the driver, commander and the gunner. 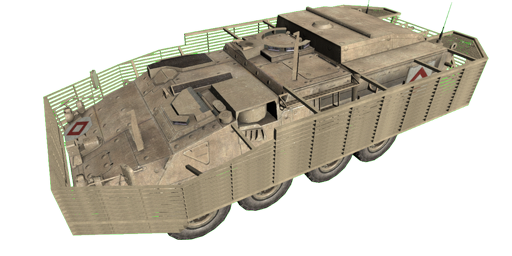 It is completely unarmed and can only transport four passengers at a time (not including the driver). 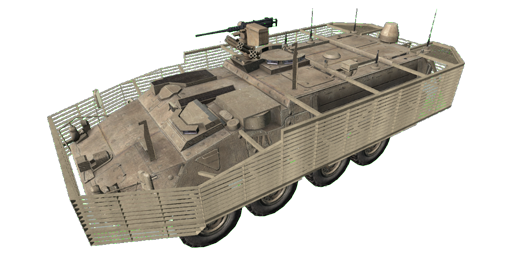 Stripped down version of the baseline Stryker ICV that retains its armament but cannot transport any passengers.

This variant only has room for a crew that consists of the driver, commander and gunner.

(*) The Stryker CV is completely non-functional in normal gameplay, and serves only as a deployable command vehicle in Capture The Island (CTI) scenarios created with the Warfare module.

All variants of the Stryker have the identical base armour values of 150.

All Stryker variants share the same component hit zones regardless of their intended role with the exception of weapon turrets on certain variants. There are slight deviations in the case of specific variants due to their raised hulls (i.e. Stryker MEV) but the general location and overall layout remain identical.

The slat cages are not functional in regular gameplay and do not provide any protective qualities against anti-vehicle weapons.

The hull can resist up to 150 points of damage.

The engine can survive 75 points of damage before failure. A damaged engine will prevent the Stryker from being able to attain its top speed.

The fuel tank can only take a meagre 21 points of damage before rupturing. Incurred damage will cause the Stryker to gradually leak fuel over time.

The tyres on all Stryker variants can only take 45 points of damage before bursting. Destroying them will not affect the Stryker's "health" pool.

The CROWS turret on all armed variants up to and including the TOW variant's dedicated ATGM launcher but excluding the MC variant's mortar can only take 120 points of damage before failing. 30% of incoming damage is always transferred onto the Stryker's "health" pool.

Disabling the turret will prevent the gunner from freely adjusting the turret's rotation/elevation but will not prevent it from being fired.

The weapons on all armed variants are controlled exclusively by the vehicle's gunner. With the sole exception of M120-armed MC variant, all Stryker gunners have access to variable zoom optics and day, night, black-hot/white-hot thermal vision modes and laser rangefinders:

NOTE: Only available on the Stryker ICV (M2) and Stryker CV variants.

NOTE: Only available on the Stryker ICV (MK19) and Stryker MC variants.

Can attain a fire rate of 400 RPM and has a muzzle velocity of 240 m/s. 6 seconds are required to reload grenade belts. The MK19 has a firing range of between 450 up to a maximum of 1,500 metres. Accuracy-wise, it has a dispersion of 0.006 rad for targets at all distances.

NOTE: Only available on the Stryker (TOW) variant.

Anti-tank guided missile launcher. Can use either autonomous or manual wire guidance.

The BGM-71E TOW launcher only has a firing delay of 1 second in-between missile launches, but takes 30 seconds to reload another rack of missiles. The launcher has an effective firing range of 1,400 metres but its missiles have an absolute maximum firing range of 3,750 metres.

Missiles have an initial launch velocity of 55.16 m/s and can reach speeds of up to 329 m/s in mid-flight. They can be controlled up to a maximum distance of 3,750 metres. The warheads have a 2 metre blast radius.

NOTE: Only available on the Stryker MC variant.

Its mortar shells are high-explosive (HE) based and have a blast radius of 30 metres. The in-built artillery computer only features two available firing solutions; Semi and Burst: