The Su-34 is a fighter-bomber featured in both ArmA: Armed Assault and ArmA 2.

The Su-34 is used exclusively by the SLA in ArmA: Armed Assault.

The Su-34 is a twin-engined, ground attack-oriented plane that uses a swept wing/cropped delta hybrid airframe.

It is based on the Flanker family of air superiority fighter jets, and is one of the most advanced fighter jets in use by the Russian military.

Armament
By default, the Su-34 is armed with a 30 mm cannon that feeds from a single 180-round belt loaded with high-explosive (HE) shells.

Other parts of its default armament suite include four short-ranged, air-to-air missiles and four 80 mm rocket pods with each containing up to 20 rockets fitted with HE warheads (for a total of 80 rockets combined).

A dedicated sub-variant is also available, and exchanges half of its rockets and A2A missiles for four anti-tank missiles instead.

Features
Unlike most conventional fighter jets, the Su-34 uses a unique tandem cockpit layout which houses both of its crew members (the pilot and gunner/weapons operator) who sit side-by-side as opposed to the traditional front-and-back layout used by most other jets in its class.

Fast and powerful, the Su-34 has extremely high manoeuvrability since it uses the same airframe as its air superiority fighter parent, but carries ordnance optimised for attacking ground targets instead.

The Su-34 is deadly against both air and ground targets thanks to its diverse loadout, and is arguably better at ground attack duties than the bulkier AV-8B Harrier.

Drawbacks
Although extremely fast, the Su-34 lacks VTOL capability like the American Harrier, which restricts it to taking off and landing on conventional airstrips only. This does limit its flexibility since it can't be operated from any location as the AV-8B is able to.

Crew Capacity
The Su-34 contains two seats for the pilot and weapons operator, who sits in tandem alongside the pilot in the cockpit. It is unable to transport any additional crewmen or passengers. 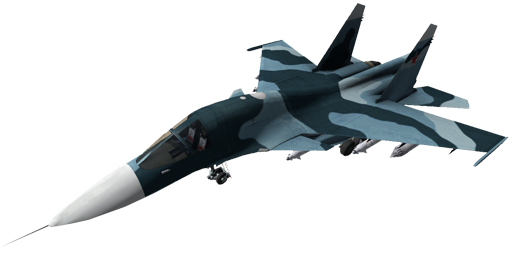 Unlike the default Su-34's loadout, this variant is outfitted with two less rocket pods (lowering its total rocket count to only 40) and carries four anti-tank missiles instead.

Both variants of the Su-34 have base armour values of 60.

The Su-34's hull can survive up to 60 points of damage before its integrity fails.

The gunner controls all four weapon systems on the Su-34 (regardless of loadout):

30 mm autocannon. Fires HE shells that are useful for Within Visual Range (WVR) dogfights.

NOTE: Only available on the baseline Su-34 variant.

R-73 missiles are soft launched and require 10 seconds to reach a top in-flight speed of 2,000 m/s. There is always an imposed firing delay of 1 second in-between launches. The warhead has a blast radius of 7 metres.

Rockets are soft launched and require 0.2 seconds to reach a top speed of 1,600 m/s in-flight. The warheads have a blast radius of 5 metres.

NOTE: Only available on the Su-34B variant.

Ch-29 AGMs utilise infrared guidance for lock-ons. Missiles are soft launched and require 1 second to reach a top in-flight speed of 500 m/s. The warheads have a blast radius of just 1 metre.

The Su-34 is used exclusively by the Russian Armed Forces in ArmA 2.

Like its Armed Assault predecessor, the ArmA 2 Su-34 remains as a highly manoeuvrable fighter-bomber that can serve as both a rudimentary ASF and ground attack jet.

Armament
By default, the Su-34 is armed with a 30 mm cannon that feeds from a single 180-round linked belt of high-explosive (HE) shells.

It is also armed with twin 80 mm rocket pods mounted onto pylons on each wing, as well as air-to-ground anti-tank missiles/short-range, infrared-guided air-to-air missiles.

Each rocket pod contains up to 20 rockets that are fitted with HE warheads, while each wing also carries 3 Ch-29 AGMs and 2 R-73 AAMs (for a combined total of 6 AGMs and 4 AAMs altogether).

Features
As in Armed Assault, the ArmA 2 Su-34 is extremely agile and can easily outmanoeuvre both the AV-8B and newer F-35 flown by the U.S. Marines.

Though it no longer has access to a dedicated anti-tank variant, the ArmA 2 Su-34 has a more balanced loadout that allows it to attack both air and ground threats at the same time.

Notable Traits
The Su-34 is noteworthy for being the only fixed-wing jet in ArmA 2 that has four AAMs as part of its default armament. While these missiles are only IR-guided and short-ranged like the AIM-9s carried by the USMC's AV-8B/F-35, the Su-34 still has two more missiles ready to fire at once which allows it to serve as a rudimentary ASF if necessary.

Combined with its existing multi-role capabilities and high agility; not to mention the lack of a proper radar stealth mechanic being modelled in ArmA 2, the Su-34 far outclasses both of its USMC counterparts in almost every aspect, with perhaps only the Czech L-159 being able to match the Su-34 (and even then, not directly).

Drawbacks
Just like in Armed Assault, the ArmA 2 Su-34 lacks VTOL capability and is limited to take offs/landings from hard-surface runways only, which greatly hampers its flexibility as it can't operate from any location like the AV-8B/F-35 are capable of doing.

The Su-34 also does not have access to any laser-guided or unguided iron bombs as well (a problem shared with the Su-39). This means that it can only resort to rocket fire to bombard structures or unarmoured/clumped up ground targets.

Crew Capacity
The Su-34 contains two seats for the pilot and weapons operator, who sits in tandem alongside the pilot in the cockpit. It is unable to transport any additional crewmen or passengers.

Su-34s can withstand up to 60 points of damage. Will result in a total loss if its integrity fails.

The gunner controls all wing-mounted ordnance, while the pilot handles the forward-facing GSh-30-1 30 mm cannon:

Air-to-ground anti-tank missiles. Can utilise either infrared or laser-guidance.

Ch-29s are soft launched and take 2 seconds to reach a top speed of 805 m/s in mid-flight. The warheads have a blast radius of 9 metres.

Unguided air-to-ground rockets. Fires HE rockets that are strong against infantry and medium armoured vehicles (not heavy armour).

The pods have a delay of 0.08 seconds in-between launches (~ 750 RPM) and are always fired in pairs. The rockets are launched with an initial velocity of 44 m/s and take 1.1 additional seconds to reach a top speed of 470 m/s in-flight. The rocket warheads themselves have a blast radius of 5 metres.

R-73s are soft launched but have an imposed delay of 1 second in-between launches. It takes 5 seconds for the missile motors to fully reach a top speed of 828 m/s. The warheads have a blast radius of 9 metres.

The Su-34 possesses an integrated Missile Approach Warning System, and will warn the pilot of incoming missiles already in mid-flight and inbound towards it.

The Su-34 has a Radar Warning Receiver, and will alert the pilot of being locked-onto by radar-based targeting systems.

The Su-34 does not posses an Infrared Warning Receiver. It will not warn the pilot of being targeted by infrared-based weapon systems.