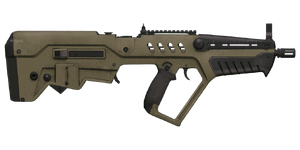 The TRG-20 is a 5.56 mm bullpup carbine used by both Altian government Loyalists and FIA guerillas in ArmA 3.

The TRG-20 is a carbine variant of the baseline TRG-21. As with its parent weapon, it is chambered to fire 5.56×45 mm NATO ammunition.

It loads from the same 30-round STANAG magazines and completely identical performance-wise, save for having a lower muzzle velocity of 840 m/s instead. The TRG-20 has the same ability to mount accessories on its top and side rails, and can also be fitted with muzzle attachments.

Like the Mk20C, the TRG-20 is similarly ideal for use by vehicle crews thanks to its shorter barrel. While it has a lower muzzle velocity as a consequence, the TRG-20's compact profile reduces its inertia penalty, making it easier to wield in close quarters.

It should be noted that unlike the Mk20C, the TRG-20 does not suffer from having higher dispersion. It is just as accurate as the baseline TRG-21, though the lower muzzle velocity does limit its range slightly to just roughly under 320-350 metres (the baseline TRG-21 has an effective range of 500 metres).

NOTE: Due to the TRG-20's reduced muzzle velocity, fired ammunition will always scale to an initial velocity of 840 m/s instead.

The TRG-20 can load 30-round STANAG magazines which are interchangeable with any other weapon chambered for the 5.56 mm NATO round. They are all available in either a Black or Sand finish, and have identical weights of 8 "mass" apiece: