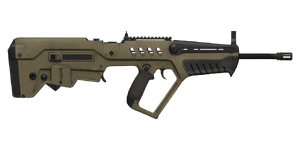 The TRG-21 is a 5.56 mm bullpup assault rifle used by both Altian government Loyalists and FIA guerillas in ArmA 3.

The TRG-21 is a gas operated, selective-fire bullpup assault rifle chambered to fire the 5.56×45 mm NATO round.

It loads from 30-round STANAG magazines, and can attain a fire rate of up to 750 rounds per minute with a muzzle velocity of 920 m/s. The top and side rails support being mounted with optical sights and side rail accessories, while the muzzle can be fitted with sound suppressors.

Along with its sub-variants, the TRG-21 is a fairly decent assault rifle that provides both a high rate of fire and low recoil in a compact package.

Compared to the AAF's Mk20 bullpup, it boasts a slightly greater effective firing range and improved accuracy at short/medium ranges. It is also fairly light to carry, and is suitable for use in close quarters thanks to its bullpup configuration.

However, some of the disadvantages that come with the TRG-21 stems from its use of 5.56 mm ammunition. Although this makes its magazines slightly lighter to carry, the TRG-21 has considerably lacklustre performance when it comes to both range and penetrating body armour.

Whilst these downsides do not necessarily render the TRG-21 an inherently poor weapon by any measure of standard, it lacks unique attributes (aside from its accuracy) that would make it stand out compared to other assault rifles in its class. 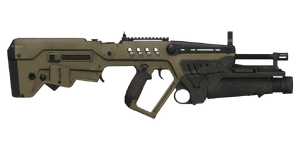 The TRG-21 EGLM is a modified version of the baseline TRG-21 rifle that has an underbarrel grenade launcher attached to it.

As with its parent weapon, it is also chambered to fire the same 5.56×45 mm NATO round, while the grenade launcher can launch 40 mm grenades with either smoke, flare or high-explosive (HE) warheads.

It loads from the same 30-round STANAG magazines and is completely identical performance-wise aside from having slightly increased inertia.

The EGLM uses a red dot quadrant sight that can be zeroed up to a maximum distance of 400 metres.

All variants of the TRG-21 support being fed with 30-round STANAG magazines, interchangeable with any other weapon chambered for the 5.56 mm NATO round. They are all available in either a Black or Sand finish, and have identical weights of 8 "mass" apiece:

Promotional screenshot released for the pre-Alpha, showing Mediterranean CSAT soldiers using the TRG series as their primary service weapon instead of the Katiba.