The Takistani Army is an OPFOR faction in ArmA 2. It was added with the release of the Operation Arrowhead expansion pack.

Following its reformation, it was renamed into the New Takistani Army (short form: NTA) and serves as an Independent faction.

Formed out of the Socialists who prevailed in the civil war, the Takistani Army does not merely serve as the armed forces of Takistan; it is the very will and right arm of the nation's government itself.

Led by its ruthless commander Colonel Muhammad R. Aziz, the self-proclaimed leader controls the country with an iron grip. Regional commanders loyal to the Colonel also serve as political leaders; particularly those who participated in the 1992 coup d'etat.

The Army is mainly composed of conventional ground forces supported by a few air assets, and is funded by the steady flow of income generated by crude oil, natural gas, as well as mineral exports. Though their hardware is incomparable to modern Western armies, Takistani soldiers are well accustomed to fighting and surviving in the barren hills of Takistan.

Many militia groups and pro-Socialist warlords are also allied to the Army, and help to "enforce" Aziz' rule over the wide expanses of Central Takistan.

Following the dissolution of Aziz' hardline regime, the Takistani Army was eventually reformed into the New Takistani Army (NTA). Supported by Western coalition forces, the NTA's priority is the stabilisation of postwar Takistan and rooting out the last remnants of the old Army still loyal to the former dictator.

Following the fall of the incumbent monarchy and second exile of the royal family, Socialist and Royalist groups fought for supremacy over control of Takistan at the height of the Cold War in 1988.

Its huge deposits of precious metal ores and crude oil reserves did not go unnoticed by the superpowers. Both factions were covertly and overtly supported by the Soviet Union and the United States (respectively), with each providing support to their sides to obtain strategic dominance over the stockpile of resources that the nation sat on.

The Soviet government directly supported the Socialists with an influx of military hardware and advisers however, which greatly helped to turn the tide against the Royalists. In 1992 after more four years of violent civil war, the Socialists were finally able to prevail and succeeded in crushing the Royalists completely (though some pockets of resistance and the tribes that supported them continued to survive).

The leader who had brought the Socialists victory - Colonel Aziz, quickly took advantage of the profits from Takistan's crude oil exports to expand and strengthen the state police and build up its armed forces.

Extensive research into chemical weapons also underwent much development under the new regime to help bolster its grip over the region and to an extent, that of the Soviet Union (in light of the latter's declining influence on the world stage).

On April 17th, 2012, Royalist tribes were covertly assisted by American CIA operatives in helping to destabilise the regime's power base. They had succeeded in destroying many of the major refineries that were being used to funnel the production of crude oil and essentially, Aziz' power base.

The well-coordinated raids on key oil fields dealt three critical blows against the regime: the loss of a entire year's worth of crude oil production, the destruction of 68% of the country's oil wells, and the sudden lack of resources required to maintain the Army's hold over Takistan.

Power structures begin to crumble; voices of discontent continue to spread all across the country. In a desperate bid to cling onto his reign, Aziz' Socialist Supreme Bureau directly threatened the nearby country of Karzeghistan with chemical weapons attacks if the oil-rich Sharig Plateau; an integral part of Takistani territory usurped by the British during the times of the Takistani monarchy, was not "...immediately returned to the people of Takistan".

A few days after the ultimatum is issued, a UN-mandated NATO coalition led by the United States deploys forces in rebel-held territories and carries out Operation Arrowhead on June 1st, 2012, following Aziz' continued refusal to back down from his threats.

For the first time in its existence, the Takistani Army would face its greatest challenge in a fight for survival against overwhelming odds.

With the loss of its leader and most senior officers either dead or captured, the Army was shattered and forced to disband completely.

Despite this enormous setback, remnants of the Army who remained loyal to the deceased leader continued to defiantly rebel against the foreign "occupation". With the help of its remaining militia allies, the Army scattered into the countryside and terrorised the civilian population. They particularly focused on those who received foreign aid and targeted Western forces whenever they could.

At the same time, the former Takistani Army had been replaced by the new civilian government and was restructured into the New Takistani Army (NTA). NTA forces were also priority targets of the Army remnants, though they could only launch minor raids rather than full scale attacks.

One month later, additional coalition forces are shipped into the country to assist the NTA in rooting out the Army remnants.

The troop surge greatly helps in countering the threat posed by the militia-backed insurgent army and barely days after their arrival, the only remaining stronghold used by the remnants is discovered and finally razed to the ground by a combination of NTA, British, and American troops, putting a decisive end to the old regime once and for all.

Though the civilian-led NTA had succeeded in restoring some form of order to the country, this was only the beginning of what would be a downward spiral into chaos.

Barely one year after the end of the foreign intervention, the NTA faced civil war with local tribes and various regional warlords who sought to overthrow the NTA and take control of the country for themselves.

Despite the support provided by its Western allies, the NTA had become bloated and corrupt; many officials were secretly working against each other and the civilian government itself was in utter shambles. Order was practically non-existent while those in authority crushed all opposition with brutal force, which helped contribute to the disenfranchisement experienced by the various tribes throughout the country.

NATO forces were also beginning to withdraw out of the country, further leaving the NTA in dire straits. They were however, assisted by a growing number of private military companies offering to assist in reverting the nation's instability. Both PMCs and NTA held intense misgivings about the other side however, and only begrudgingly agreed to "work" together.

What happens to the NTA in the aftermath of the NATO drawdown and PMC surge is not known, though the country would remain in a state of near-anarchy for many more years until the early 2020s.

While vastly inferior to its Western coalition counterparts, the Takistani Army is considered to be a regional power in its own right. Its forces are equipped to handle most internal threats and possessed a considerable range of outdated and modern assets acquired from both the East and West.

However, only professional soldiers - specifically Aziz' elite bodyguards, had access to this hardware; most conscripts only wore simple olive drab green fatigues with chest rigs and rucks adorned in a Tiger Stripe pattern.

They did not retain access to body armour or modern combat helmets aside from obsolete Soviet-era SSh-68 steel helmets. Most preferred a simple kufiyah and turban not for ballistic safety or concealment, but rather for protection from Takistan's hostile environment and weather conditions.

Unlike neighbouring Chernarus, the Army had access to a mixture of both Eastern and (older) Western-made hardware; the latter used alongside relatively newer Soviet/Russian-made weapons. For instance, the main assault rifle of the Army is the Belgian-made FN-FAL 7.62 mm battle rifle, which is supplemented by smaller numbers of American M16A2 and Russian AK-74 5.56 mm/5.45 mm assault rifles.

Likewise, their vehicles are also a mixture of Cold War-era designs of both Eastern and Western in origin. The Takistani Air Force (at the height of its power) utilised Soviet-made export Mi-24D gunships and Su-25 attack jets, supplemented by a small number of Czech-made L-39ZA light attack jets.

Post-Operation Arrowhead, the New Takistani Army has retained much of its pre-war assets in spite of the organisation's restructuring.

Soldiers continue to don the same uniforms and personal protective equipment as their predecessors, though some units working closely alongside United Nations Forces Takistan (UNFORT) peacekeepers have begun phasing out Soviet-era hardware in favour of relatively newer surplus American-made firearms. 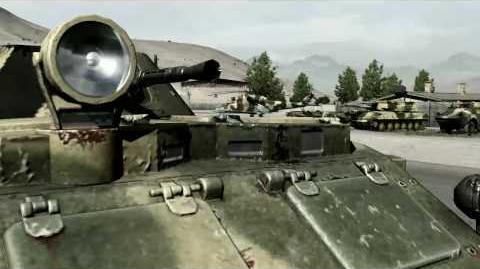