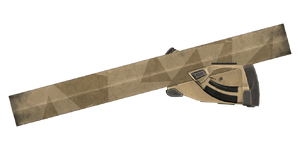 It uses 127 mm missiles with high-explosive fragmentation (HE-Frag) warheads that are capable of tracking and hitting aircraft at distances of up to 3,500 metres.

The launcher's command launch unit (CLU) can toggle between three modes of operation: "normal" day vision, white-hot thermal, and black-hot thermal. In addition, it can have its magnification adjusted to either 1x or 2x strength. The CLU has a small rail that supports being fitted with laser pointers or flashlights.

The Titan launcher's seeker requires three seconds to lock onto a target. However, it has a 60% chance of having its lock broken by flare-based countermeasures.

Designed to be a fire-and-forget missile launcher that can be used against aerial vehicles, the Titan can turn any infantry unit into an extremely dangerous threat for all aircraft.

Its fast-moving missiles can easily cripple, if not outright destroy, even the toughest of helicopters like the CSAT Mi-48 in one strike. Fixed-wing jet aircraft are no exception to being hit either; they are equally vulnerable to being struck by a missile should they fly within range of the Titan's sensor.

Like its smaller anti-tank counterpart, the Titan's CLU uses an infrared sensor which allows the operator engage enemy aircraft under all weather and lighting conditions (provided that the target has a 'hot' thermal signature).

Nonetheless, although powerful against enemy aircraft, the Titan's main downside is that it's only capable attacking aircraft. Contrary to its name, the Titan is not a multi-purpose weapon and cannot be used to attack ground-based vehicles or infantry like its Compact variant.

Likewise, the Titan cannot utilise SACLOS guidance and must always acquire a lock-on before the missile can track a target. This greatly lowers the chances of a successful hit as most aircraft will have an infrared warning receiver (IWR) that will warn them of an incoming AA missile, prompting them to either attempt to outmanoeuvre or confuse the missile with countermeasure flares.

The Titan MPRL is only capable of loading and firing one type of missile. Each missile has weight of 100 "mass" units:

The missile is always launched with an initial velocity of 18 m/s. It takes a further 2.25 seconds for the motor to gain enough thrust to reach a top speed of 850 m/s.

The warhead has a blast radius of 6 metres and a proximity fuse radius of 10 metres. Its seeker has a 10% chance of losing lock to flare-based defensive countermeasures.

Missiles launched by the Titan MPRL can only utilise one type of sensor for guidance:

The missile can lock onto 'hot' targets that are up to 3.5 km away, and is only able to track moving targets that are flying at speeds of up to 900 km/h. The sensor's lock-on cone differs depending on orientation; horizontally it is limited to an angle of 7 degrees while vertically it is restricted to just 4.5 degrees.

If the target is 2.5 km (or further) away and is flying at a height of 500 metres or less, then the missile will also be unable to acquire a lock-on.