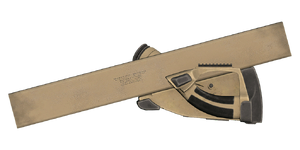 It can be loaded with either 127 mm high-explosive anti-tank (HEAT) or antipersonnel (AP) warheads that are capable of striking targets at distances of up to 2,000 metres away.

The launcher's command launch unit (CLU) is able to toggle between two thermal modes ("normal" day vision, white-hot thermal, and black-hot thermal), and can have its magnification toggled between 1x or 2x strength. The CLU also has a small rail that supports being fitted with laser pointers or flashlights.

The Titan can toggle between using two flight trajectory modes: a standard direct fire, and an alternate top-attack profile. Top-attack mode only functions with the Titan's AT missiles as they have the ability to autonomously guide themselves. AP missiles on the other hand, lack this capability due to relying exclusively on SACLOS for guidance.

True to its name, the Titan's ability to load and fire AT/AP missiles is what makes it a unique multi-role weapon. The AT missile can easily immobilise, if not critically damage, armoured vehicles such as Main Battle Tanks with one or two strikes. On the other hand, lighter vehicles like Armoured Personnel Carriers will almost always be destroyed in one hit.

Likewise, the AP missile deals devastating area-of-effect damage and can easily wipe out an entire enemy squad should the missile impact the right location (although not quite comparable to the RPG-42's/MAAWS Mk4's HE munitions).

Unlike the PCML, the Titan's CLU does not utilise a Visual sensor and has its missiles track their targets via infrared. This provides it a significant range advantage and allows the operator to reliably engage enemy vehicles under all weather and lighting conditions - provided that the target has a 'hot' thermal signature.

The Titan's missiles can also be guided manually via SACLOS without having to acquire a lock-on. This capability allows the operator to attack enemy vehicles while negating any possibility of the target being alerted by their infrared warning receivers (if they have one).

While it is capable of handling all types of ground-based threats however, the Titan is technically not a true multi-role weapon in the sense that because it is designed primarily to attack ground targets, it can't reliably be used against aircraft.

Though the Titan's operator can (theoretically) guide missiles into hitting aircraft via SACLOS, the process is extremely difficult in practice and can usually only be employed against low-flying helicopters flying along a straight path. It also forces them to remain motionless in order to keep the aim of the CLU's crosshairs steady at all times, so as to prevent the missile from flying off-course.

The other drawback is the weight of its missiles; the user will need to carry one of the larger backpacks (such as the Carryall) in order to haul spare missiles. Alternately, another team member will need to serve as an assistant to carry one for the operator. Regardless of whoever is assigned the burden, they will have their stamina reduced significantly and therefore slow down the movement of the squad.

The Titan MPRL Compact can load and fire two types of missiles. Anti-vehicle AT missiles weigh a "mass" of 100 units while anti-infantry AP missiles only weigh 60 "mass":

It is intended to be used against Main Battle Tanks and other heavily armoured vehicles. It can also be used to bring down fortified structures that would otherwise be immune to non-AT or pure explosive-based munitions.

While the Titan's AT missile isn't quite as powerful as the 9M135 Vorona's HEAT missile, it is far easier to control since it flies slower.

Similarly, the Titan's AT missile is also quite effective at getting past vehicle slat cages, as the tandem warhead combines an explosive charge with a penetrator submunition. The charge first blows up the cage while the penetrator proceeds to damage the vehicle's actual armour.

However, this only applies to guiding the missile manually or locking on while in direct fire mode. In most cases, the operator can simply switch to top-attack mode instead, which can bypass the slat cages altogether and have the missile strike the weakest point of the vehicle (the roof/turret).

The AT missile has a maximum range of 2,000 metres both for when locking on and for manual guidance. It has an initial launch velocity speed of 18 m/s and can reach a top in-flight speed of 180 m/s. The seeker has a 60% chance of losing lock to smoke countermeasures. The warhead has a blast radius of 3.3 metres, while the penetrator submunition has a launch velocity of 1,000 m/s and a penetration depth of 900 millimetres.

Uses a high-explosive (HE) warhead.

The Titan's AP missile is an anti-personnel munition. Though it will create an extremely large explosion on impact which is lethal against infantry, it will inflict absolutely zero damage to armoured vehicles as the warhead lacks a kinetic penetrator.

Unlike AT missiles, it should be noted that the AP missile can only be guided manually and does not possess the ability to lock onto targets even if they have an infrared signature.

AP missiles have an absolute maximum range of 2,000 metres as it cannot be controlled beyond this distance. It has an initial launch velocity speed of 18 m/s and can reach speeds of up to 180 m/s mid-flight. The warhead has a blast radius of 10 metres.

AT missiles launched by the Titan MPRL Compact can only utilise one type of sensor for guidance:

The missile can lock onto 'hot' targets that are up to 2 km away, and is only able to track mobile targets that are moving at speeds of up to 900 km/h. The sensor's lock-on cone differs depending on orientation; horizontally it is restricted to an angle of 3.7 degrees while vertically it is limited to 2.3 degrees.

The sensor is unable to identify targets that are more than 100 metres above terrain level (ATL).

The Titan MPRL Compact can toggle between two flight profiles:

Missile uses a linear flight trajectory. This is the default mode for both manually-guided AP and infrared-homing AT missiles.

Once launched, the missile will transition between two phases:

The missile has a minimum targeting range of 180 metres in this mode. If the target is not beyond this distance, it will default to direct-attack mode instead.

Lastly, if the missile loses track of the target during the seeking phase it can be defaulted back to manual guidance (SACLOS). Assuming that the seeker was not confused by defensive countermeasures, the missile will act as if it was being guided by SACLOS in the event this occurs.