The To-201 Shikra is a multi-role/air-superiority fighter jet used by both CSAT forces and the Russian Spetsnaz in ArmA 3. It was added with the release of the Jets DLC.

This is a premium asset that requires ownership of the Jets DLC.

The To-201 is a twin-engined stealth fighter that uses a semi-blended-wing-body fuselage.

Primarily designed with supermanoeuvrability in mind, it incorporates all-moving horizontal and vertical stabilisers.

Armament
By default, the To-201 is armed with a 30 mm cannon that is loaded with 180 rounds of high-explosive (HE) ammunition.

The To-201 has thirteen (seven for the stealth variant) pylons that support dynamic loadouts.

NOTE: The following pylons only apply to the non-stealthy variant of the To-201:

The targeting module also has an integrated laser designator which can be used to provide self-designation in conjunction with the To-201's KAB-250 bombs.

Features
Like its NATO counterpart, it has both stealthy and conventional configurations; the stealth configuration stores up to seven weapons in internal bays but otherwise lacks external hardpoints.

When it comes to Within Visual Range (WVR) dogfights, the To-201 is far superior to the NATO Black Wasp in almost every aspect. Its agility is unrivalled, and can easily out-turn and outmanoeuvre its NATO counterpart with ease. Having the outermost weapon stations reserved for air-to-air missiles ensures that even when outfitted for close air support, the To-201 is still deadly in a dogfight.

Although it is slightly inferior avionics-wise, the To-201 can make up for it by closing the distance gap between it and a Black Wasp by simply flying faster, nullifying the latter's radar advantage.

Notable Traits
The To-201 is the only fixed-wing jet in ArmA 3 that is actually capable of carrying more than two anti-radiation missiles for any given mission. Its NATO counterpart for instance, can only store two ARMs at a time (and only on the minimally-stealthed variant) while the To-201 can bring up to three into battle; two on the external wing hardpoints and one internally.

This makes the To-201 a particularly lethal SEAD aircraft, as its ARMs combined with its passive radar means that it can safely detect and engage SAM batteries at stand-off ranges without relying on other units to spot for it.

Drawbacks
The only real downside to the To-201 is its stealth variant, which has one less internal pylon and is restricted to carrying only four long-range AA missiles at a time internally. This is in contrast to the Black Wasp, which can be armed with up to six long-range AAMs at a time and loaded with two more short-range AAMs.

Crew Capacity
The To-201 has a maximum seating capacity of just one; the pilot themselves. It cannot transport any passengers. 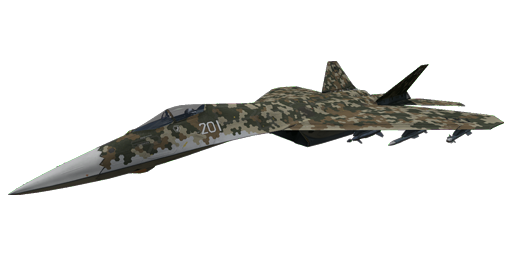 Has a total of thirteen pylons (six external) that support dynamic loadouts, but are by default configured with a multi-role loadout. 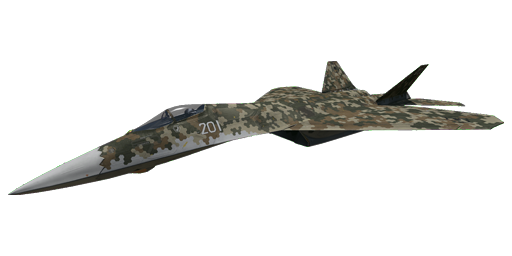 Only has a total of seven internal pylons that support dynamic loadouts, but is also configured to use a multi-role loadout.

Both variants of the To-201 have base armour values of 65.

The jet's hull can withstand 227.5 points of damage. Will result in a total loss if the hull's "health" is depleted.

Both engines can resist 162.5 points of damage before failing. The engines will take 400% increased damage from high-explosive (HE) weapons.

Destroying the engines will not result in a total loss, though 80% of damage is still inflicted against the To-201's "health" pool. It can however, potentially cause it to blow up if the hull's integrity is already at critical.

If damaged: Decreases thrust output and can prevent the To-201 from attaining its top speed.
If destroyed: Total engine failure; jet will lose its ability to maintain power completely.

The To-201's flight instruments, Head Mounted Display (HMD) and Multi-Functional Displays (MFD) can take up to 120 points of damage before failure. All instruments take 400% increased damage from HE-type weapons.

If damaged: Causes periodic flickering of MFD screens and the pilot's HMD. Instruments remain fully functional.
If destroyed: Both the MFD and HMD will be disabled. Instruments will malfunction and do not provide proper readings.

The To-201's twin fuel tanks can withstand up to 227.5 points of damage before rupturing. It takes 350% increased damage from HE-type weapons, and 60% of incoming damage is also inflicted onto the To-201's "health" pool.

If damaged: Gradual fuel leaking; will lose up to a maximum of 60% of the remaining fuel supply.
If destroyed: Rapidly lose entire fuel supply over the course of several seconds.

All six components can resist 130 points of damage before failing (individually). They take 300% increased damage from HE-type weapons.

Depending on which specific control surface is hit, the jet's handling and agility will be degraded based on the severity of the component's damage. If multiple parts are hit, it may become impossible for the To-201 to perform any high-G manoeuvres.

Both variants of the To-201 are notoriously poorer at remaining hidden from infrared/visual-based sensors due to its large size. They actually have increased visibility to both types of sensors:

The standard To-201 with external hardpoints retains no stealth capabilities against active radars. The dedicated stealth variant on the other hand, has an RCS rating of 0.6 and can only be detected at 60% of an opposing radar's maximum range (40% reduction).

The To-201 has an array of sensors designed to allow it operate effectively in both ground attack and air superiority roles:

It has an active radar range of 13 km against aerial targets and 9 km against ground targets. Azimuth/elevation coverage is limited to 60 degrees in both directions.

Targets can be identified once they move within 6 km range of the To-201's position.

The To-201's IRST sensor has an operating range of 5 km against aerial targets and 3 km against ground targets. Azimuth coverage is a full 360 degrees, but is restricted to an elevation of 120 degrees only. The IRST sensor is able to track targets moving at speeds of up to 1,800 km/h.

Its visual sensor is limited to only 4 km for aerial targets and 3 km for ground targets. Azimuth coverage is limited to 26 degrees, while for elevation it is 20 degrees. Targets can only be tracked if they are moving at speeds of 360 km/h or less.

Both sensors have a minimum operating range of 500 m, while targets can be recognised once they move within a distance of 2 km.

It should also be noted that the visual sensor is located in the pilot's targeting camera, and will rotate independently of the aircraft's actual heading. It has an elevation offset of 1 degree.

The RWR has a 360 degree detection radius and has a target recognition range of 12 km.

NOTE: Only the weapons used on the default loadout for the To-201 are listed here. For full details on ordnance that can be mounted on the To-201, refer to the dynamic loadouts article.

Target Lead Indication is available for aiming on the pilot's Heads Up Display (HUD). Landing hits is accomplished by pointing the crosshair onto the circle.

Relies on the To-201's Infrared Search and Track sensor to function.

Relies on the To-201's Active Radar sensor to function.

If no laser guidance is provided, KAB-250s can be dropped as free-falling bombs instead. Predicted Impact Point assistance is available to help with "aiming" in this manner.