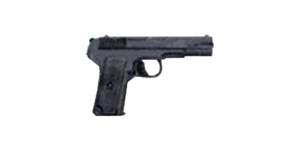 The Tokarev TT-33 is a 7.62 mm handgun used by both Soviet military forces and Nogovan Partisans in ArmA: Cold War Assault.

The Tokarev TT-33 is a semi-automatic pistol that is chambered to fire the 7.62×25 mm round.

It loads from 8-round magazines, and can attain a fire rate of up to 600 rounds per minute with a muzzle velocity of 450 m/s.

The TT-33 is the standard-issue service pistol of Soviet forces at the height of the Malden Islands Crisis. Compared to its U.S.-made counterpart, the TT-33 retains better stopping power due to its 7.62 mm round. It is only just slightly weaker than the S&W revolver, requiring only one or two body shots to take down an infantry target.

However, the TT-33's main drawback is its rather small magazine size. Unlike the 92F, the TT-33 is loaded with two less rounds in its magazine (versus the 92F's total of 10) which necessitates frequent reloading. Its other drawback is its fairly poor accuracy and low range which limits its maximum effective range to just under 35-40 metres.

Last but not least, it is unavailable in a suppressed sub-variant like the Glock 17 pistol, further limiting its usefulness if a mission requires a stealthy approach.

The TT-33 only supports one type of magazine. Each of them require at least one free inventory slot to carry: