The Truck is a light commercial vehicle used by both Altian/Tanoan civilians, as well as in limited numbers with the FIA, Syndikat rebels, and their L'Ensemble successors in ArmA 3.

The Truck is a multipurpose, medium-sized, off-road capable van designed for a variety of roles ranging from transporting freight and/or passengers, to refuelling military and civilian vehicles.

Features
It is available in up to three variants; a standard pickup variant with an open cargo body, a fuel transporter with a cistern, and a freight transporter variant that has a large box to carry supplies.

Mobility
The Truck can accelerate and attain a fairly decent top speed on paved roads, and is also able to maintain this speed (mostly) while off-road. However it has subpar handling regardless of the terrain type, and there is always a risk of a rollover while turning on corners due to its higher centre-of-mass.

Drawbacks
As a civilian vehicle designed to carry only supplies or passengers, the Truck obviously lacks any kind of armour plating and will not survive being struck by explosives or anti-vehicle weapons. Riders on the Pickup variant are left completely exposed to enemy fire and can be easily shot unless the Truck is being driven at high speeds.

Crew Capacity
Passenger capacity depends on the variant, but all of them are able to carry at least three passengers. This includes the driver and up to two passengers - all of whom sit together in the enclosed cab. 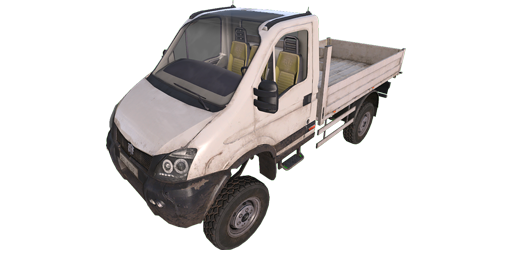 Baseline variant with no additional features other than the ability to carry up to ten passengers in the rear open cargo body.

All positions (except for the cab passengers) can utilise FFV; the front two sitting in the open cargo body need to stand up in order to fire their weapons. They are able to rest their weapons on the cab's roof for better stability as well. This variant is primarily used by both the Syndikat and FIA as their troop transport, but is also used by civilians as well. 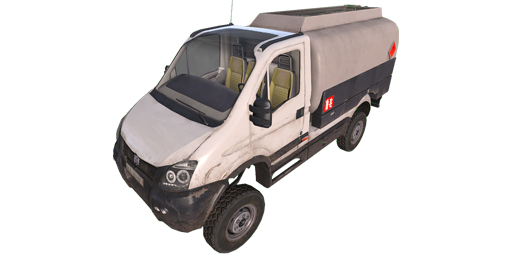 Has a large fuel cistern fitted to the rear of the cab.

It can refuel nearby land vehicles and grounded aircraft. Has only three seats in the cab and cannot transport any other passengers. This variant is used by both the FIA and civilian airport workers. 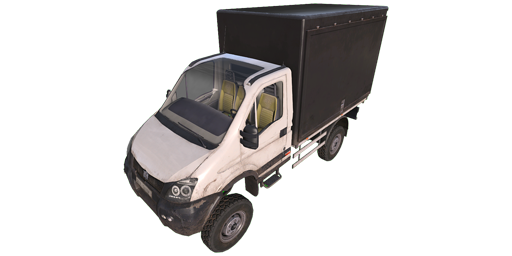 Has a large box fitted to the rear of the cab that can store supplies. Contains the same amount of seats as the Fuel variant.

The FIA do not use this variant and is exclusive to civilians only.

All variants of the Truck have base armour values of 80. As civilian vehicles, they do not support being fitted with any additional armour modules.

The following highlighted positions serve as weak points on Trucks:

The body on all Trucks can survive 120 points of damage. It suffers an 800% damage penalty from high-explosive (HE) type munitions.

At least 50% is always transferred onto the Truck's main "health" pool. Depletion of the body's integrity will not cause a catastrophic kill unless the Truck is in critical status.

The engine can survive only 40 points of damage before failing. It takes 50% less damage from HE-type munitions, though 50% of incoming damage will be shared with the Truck's "health" pool.

It cannot cause a catastrophic kill by itself unless the Truck is critically damaged.

If damaged: Reduces power output, acceleration is decreased and it may become impossible to climb uphill.
If destroyed: Instantly immobilises the Truck.

The Truck's fuel tank (not the cistern on the Fuel variants) can resist just 40 points of damage before rupturing.

10% of damage inflicted onto the fuel tank will be transferred onto the Truck's main "health" pool. It takes 200% increased HE-type munitions. A destroyed fuel tank will not cause a catastrophic kill unless the Truck is critically damaged.

The Fuel variant's cistern can take up to 40 points of damage before rupturing. The cistern takes 200% increased damage from HE-type munitions, and at least 10% of it is also shared with the vehicle's main "health" pool.

All four wheels are able to resist up to 120 points of damage. They incur a 400% damage penalty to HE-type munitions, though no amount of damage is shared with the vehicle's main "health" pool.

Destroying all four wheels will be needed to immobilise the Truck. Depending on which and how many are remaining, it is entirely possible for Trucks to continue driving with two out of four tyres missing (though making simple manoeuvres will be near-impossible).

Corporal Ben Kerry and his fellow FIA guerillas raid an AAF depot for supplies. The rear of the fuel carrier variant with a cistern can be seen here.