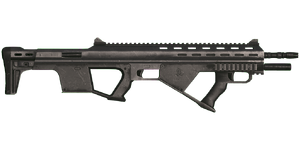 The Type 115 is a 6.5 mm dual-role bullpup assault rifle used exclusively by Viper operatives in ArmA 3. It was added with the release of the Apex DLC.

The Type 115 is a selective-fire assault rifle that is primarily chambered to fire caseless 6.5×39 mm ammunition. It also has an underbarrel anti-materiel rifle module that is designed to fire specialised .50 BW rounds.

It loads from the same 30-round box magazines used by Katiba bullpups, and can reach a fire rate of up to 895 rounds per minute with a muzzle velocity of 800 m/s. The Type 115 accepts accessories on all three of its rails; top, side and underbarrel (located beneath the AMR module) and can also mount attachments onto its muzzle.

The most unique feature of the Type 115 is its anti-materiel rifle module. Fed from 10-round box magazines, this component grants the operator the ability to disable lightly armoured vehicles and possibly even damage exposed components on armoured vehicles (such as optics) with several well-placed shots.

Being the sole dual-role weapon of its kind, the Type 115 has no direct counterpart. While it is significantly less accurate than the SPAR family of assault rifles, the Type 115 makes up for it by firing the more hard-hitting 6.5 mm round.

In addition, the underbarrel AMR's ammunition can outright kill armoured infantry even with an indirect hit. This is in stark contrast to the SPAR's single-shot grenade launcher, which isn't consistently able to take out its targets - especially if they happen to be wearing explosive resistant body armour vests.

However, it should be noted that the AMR module fires a distinctly separate kind of 12.7 mm round (.50 BW) as opposed to the 12.7×108 mm cartridge used by, for instance, the GM6 sniper rifle. It has a much lower muzzle velocity of only 580 m/s, limiting the AMR module's range to roughly 1,000 metres or less.

Though it remains highly effective against most ground targets at short-medium distances, it cannot match the range or capability of dedicated sniper rifles.

The Type 115's rifle component supports two types of magazines. The underbarrel AMR module can load one type of magazine that is specifically designed for its use:

Standard caseless 6.5 mm ammunition. Weighs at a "mass" of 10 units.

The last four rounds of the magazine always consist of visible green tracers.

30 rounds worth of visible green tracers. Weighs the same as the regular magazine with a "mass" of 10 units.

Loaded with caseless armour-piercing rounds. Has a "mass" of 12 units.

Does not contain any rounds with visible tracers.