A civilian variant also exists and is simply known as the UGV, where it is used in limited numbers by IDAP aid workers. It was added with the release of the Laws of War DLC.

The Stomper is a 6x6 unmanned ground vehicle that can autonomously move and engage enemy targets on its own accord without requiring manual input from the operator.

Features
It is available in two variants; an unarmed version that has no weapons mounted on it that is meant to be used for transporting supplies and cargo, and an armed version that is fitted with an RCWS turret armed with a dual-mount 12.7 mm heavy machine gun and 40 mm automatic grenade launcher.

A small wheeled drone, the Stomper can serve both as force multiplier when deployed alongside other ground units or as a mobile resupply vehicle.

Drawbacks
Extremely fragile by most standards, a tiny amount of medium/large calibre arms fire or explosives is sufficient to immobilise (if not outright destroy) the Stomper if the operator carelessly sends it against threats it cannot handle.

Therefore it is best used as a mobile sentry drone to guard areas, as a support asset to escort motorised infantry squads, or be manually controlled to utilise the Stomper in a reconnaissance role, scouting ahead for friendly forces as opposed to being apart of frontal assaults.

Crew Capacity
All variants have a single seat located at the front of the chassis that can transport up to one passenger (usually the drone operator themselves). 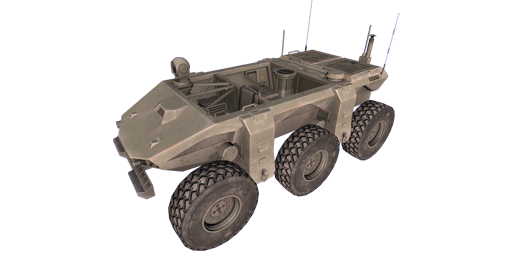 Baseline variant. It is more or less designed to be a munitions/supply carrier, being completely unarmed and otherwise lacking any other use in combat.

Used by NATO forces, the AAF and the LDF. 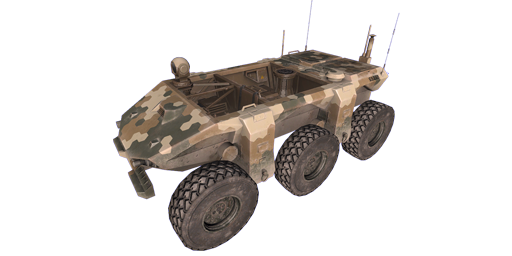 Identical to the UGV Stomper variant but exclusive to CSAT forces. 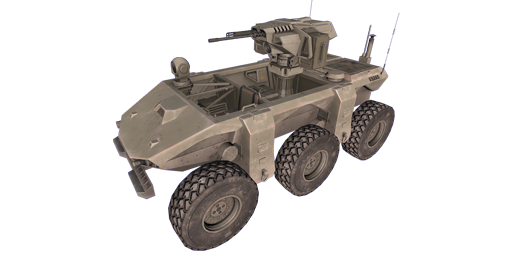 Armed version of the baseline Stomper.

Unlike unarmed Stompers, the RCWS variant is fitted with an RCWS turret that is armed with a dual-mount 12.7 mm heavy machine gun and 40 mm automatic grenade launcher.

The externally mounted RCWS comes pre-loaded with a single 200-round belt and 96 grenades fitted with high-explosive (HE) warheads. It has no spare belts to reload from for either weapon. 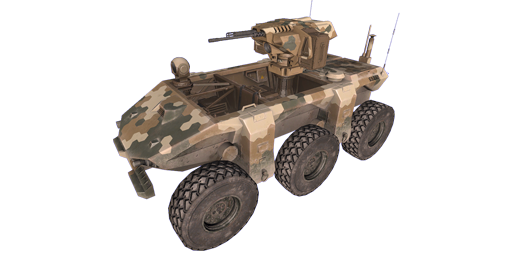 Statistically and functionally identical to the UGV Stomper RCWS variant, but exclusive to CSAT forces. 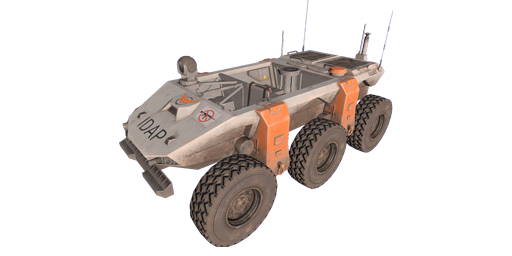 Visually and functionally identical to the unarmed Stomper/Saif variant.

This specific model is exclusively utilised by the IDAP, and does not accept any other camouflage options.

(*) This paint scheme can only be applied to the unarmed variant of the Stomper/Saif and IDAP's UGV.

All variants of the drone have base armour values of 30 and use Composite Armour plating. It is not possible to mount Slat cages onto the drone, nor can Explosive Reactive Armour (ERA) blocks/panels be installed.

The following highlighted positions serve as weak points on the drones:

Note that weak point positions remain identical on all drone variants regardless of whether they retain armament.

The hull can only resist a meagre 21 points of damage. Will result in a catastrophic kill if its integrity is depleted.

The engine can withstand up to 60 points of damage before it fails. At least 50% of incoming damage will be shared with the drone's "health" pool. It takes 80% less damage from high-explosive (HE) type munitions.

Destroying the engine will not cause a catastrophic kill unless the drone's overall "health" is at less than half of its integrity.

If damaged: Reduces power output, acceleration is decreased and it may become impossible to climb uphill.
If destroyed: Instantly immobilises the drone.

The fuel tank can only take 30 points of damage before it ruptures. 30% of incoming damage will always be shared with the drone's main "health" pool. It takes 40% less damage from HE-type munitions.

A destroyed fuel tank will not cause a catastrophic kill unless the drone is critically damaged.

If damaged: Gradually leak up to 30% of fuel over time.
If destroyed: Rapidly leaks all remaining fuel in the tank over several seconds.

Each of the six wheels can only survive 15 points of damage. They are susceptible to small arms fire and take 400% extra damage from HE-type munitions. At least 30% of this damage will be shared with the drone's main "health" pool.

Destroying all of the drone's wheels will be needed to immobilise it. Depending on which and how many are remaining, it is entirely possible for the drone to continue driving even with five of its tyres missing (though making simple manoeuvres will be almost impossible).

The RCWS turret on armed variants can resist up to 250 points worth of damage. No amount of damage incurred is shared with the drone's "health" pool.

The passenger riding in the front seat of the Stomper can utilise FFV to fire their own weapons.

The "gunner" AI position handles the turret-mounted armament. For optics, they have access to a variable zoom camera that can only toggle between regular day or black-hot/white-hot thermal vision modes:

NOTE: Only available on the UGV Stomper RCWS and UGV Saif RCWS variants.

The fire control system is only able to automatically zero on stationary targets and requires 1 second to finish adjusting. Manual zeroing is also possible, though only in increments of 100 m up to a maximum of 1500 m.

NOTE: Only available on the UGV Stomper RCWS and UGV Saif RCWS variants.