The UH-60 is a four-bladed, twin-engine transport helicopter that is designed as a front-line utility helicopter used for air assault, air cavalry, and aeromedical evacuation purposes.

Armament
It can be armed with either a single left side door-mounted .50 cal heavy machine gun or twin fixed forward-facing 70 mm rocket pods.

The HMG feeds from a single 500-round belt, while each of the FFAR rocket pods are loaded with 19 70 mm rockets fitted with high-explosive (HE) warheads (for a combined total of 38 rockets).

Features
The UH-60 was the primary transport helicopter of the U.S. military at the height of the Cold War.

Replacing the venerable but drastically outdated UH-1 light helicopter, the UH-60 is better in almost every way and has increased troop capacity, cargo lift capability, as well as improved armour plating (and therefore survivability).

Mobility
Compared to its Soviet counterpart, the UH-60 flies faster and handles better at high speeds due to being nimbler. It is also better armoured and has slight resistance against moderate amounts of small arms fire (though not against calibres ranging from 7.62 mm and above).

Drawbacks
However, it isn't nearly as efficient when serving in a gunship role due to carrying far less munitions. This is due to its stub wings being shorter and therefore restricting it to fitting only two rocket pods at a time. The Soviet Mi-17 on the other hand, has six rocket pods installed and is able to store and fire up to 192 rockets (in contrast to the UH-60's 38).

Crew Capacity
The UH-60 can transport up to twelve passengers at a time, and has a crew that consists of the pilot and a co-pilot, who also doubles as a gunner and controls the UH-60's weapon systems (regardless of variant). 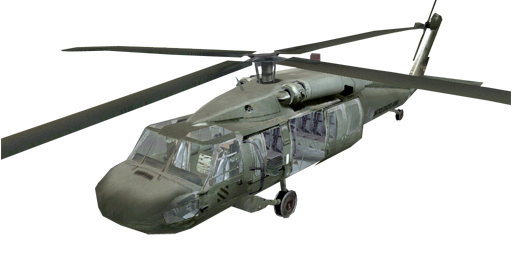 Virtually identical in all aspects aside from the stub wings and rocket pods being removed in favour of a left side door mounted .50 cal HMG. It transports the same number of passengers as the baseline UH-60.

Both variants of the UH-60 have 60 points of armour plating.

The pilot controls the FFAR pods on the baseline rocket-armed model. However, a dedicated crew chief will be controlling the M2 heavy machine gun on the MG variant instead:

NOTE: Only available on the baseline UH-60 model.

Unguided air-to-ground 70 mm rockets. Forward-facing only but is powerful against groups of infantry and unarmoured/lightly-armoured ground vehicles.

The FFAR pods can launch rockets at a rate of one every 0.1 seconds. They have an initial launch velocity of 44 m/s and can reach a top in-flight speed of 1,000 m/s.

It takes 0.05 seconds for the rocket motors to ignite after launch and a further 3.5 seconds to accelerate to their top speed. The warheads are HE-based and have a blast radius of 3 metres.

NOTE: Only available on the UH-60 MG variant.

The gun is always mounted on the left side door. Horizontally, it can be swivelled up to a maximum of 150 degrees in both directions. Vertically however, it is restricted to an elevation of only 5 degrees and a depression of 42 degrees.

The UH-60 Black Hawk is primarily used by the U.S. Army as well as in limited numbers with RACS military forces in ArmA: Armed Assault.

The Armed Assault UH-60 is essentially an updated version of the Cold War Assault UH-60. There are few differences, save that the new UH-60 is better equipped to handle different threats.

Features
It is available in three variants; the standard troop transport variants used by the U.S. Army and another by the RACS, and a third model that is armed with twin rocket pods.

The transport variants of the UH-60 are equipped with twin 7.62 mm miniguns fitted to the side doors on both sides of the helicopter.

Each M134 minigun feeds from a single 2,000-round linked belt (for a combined total of 4,000 rounds). The FFAR-equipped variant on the other hand, is armed with twin 70 mm rocket pods that each contain up to 19 rockets fitted with HE warheads.

Unlike the Cold War Assault UH-60, the Armed Assault UH-60 can now transport one additional passenger (13 versus 12) and is slightly better when it comes to suppressing enemies thanks to its door-mounted miniguns.

The twin M134s can fire off hundreds of 7.62 mm rounds in the span of a few seconds at enemy infantry and light vehicles in both directions, rather than being restricted to using a slow-firing machine gun like the Mi17, or the fixed forward-facing rocket pods on the Cold War Assault UH-60.

Mobility
All variants of the UH-60 have far better aerodynamics and higher top speeds compared to the SLA's Mi17. Since its airframe isn't as bulky as the latter, the UH-60 can easily land in tight spaces without too much difficulty.

Drawbacks
The UH-60's FFAR variant suffers from the same problems as its Cold War Assault counterpart, namely that it doesn't carry many rockets as part of its default loadout.

Though the minigun-armed variants are much better for suppression purposes due to their higher rate of fire and ammunition capacity (versus the Mi17's slow firing and 100-round only PKT machine gun), the same cannot be said for the UH-60's FFAR pods as they carry 58 rockets less in total. In essence, this makes the FFAR-armed UH-60 far less useful as a light gunship since it will need to rearm after just a single strafing run.

Crew Capacity
All variants of the UH-60 contain enough seats for a crew that consists of the pilot and a co-pilot. They are capable of transporting up to thirteen passengers at a time (the co-pilot is considered to be the thirteenth). 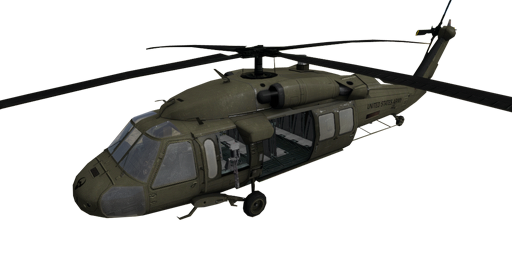 It is armed with twin M134 7.62 mm miniguns fixed to the crew doors on both sides of the helicopter. The M134s each feed from a single 2,000-round linked belt.

It can transport up to thirteen passengers at once. 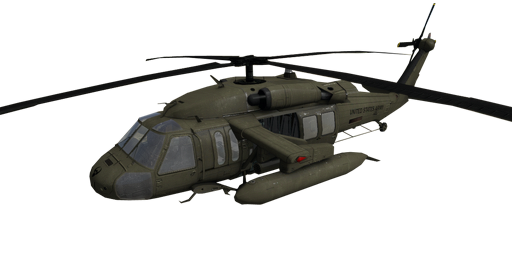 The twin M134s and side gunner positions have been removed on this variant, and are instead replaced with stub wings attached to the airframe. The stub wings contain FFAR 70 mm rocket pods that contain 19 rockets fitted with HE warheads (for a combined total of 38 rockets).

Transports the same number of passengers as the baseline troop transport model. 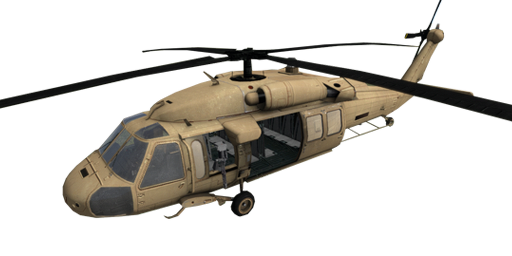 Identical to the baseline troop transport UH-60. This variant is exclusively used by the RACS and has its own unique camouflage scheme.

There are otherwise no functional or aesthetic differences to the regular UH-60. 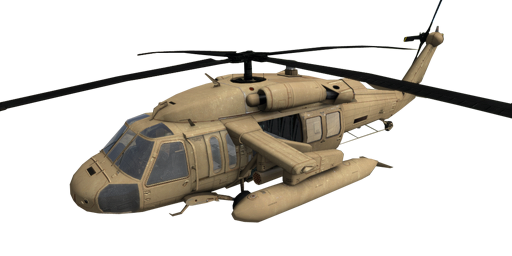 Identical to the U.S. Army FFAR-equipped variant but is exclusive to RACS forces.

There are no functional or aesthetic differences to the UH-60 FFAR model.

All variants of the UH-60 have base armour values of 40.

UH-60 hulls can withstand up to 40 points of damage.

Their engines can only withstand 10 points of damage before failing.

The UH-60's onboard systems can only incur a meagre 6 points of damage.

The main rotors can take 12 points of damage before breaking.

The tail rotors can only withstand 8 points of damage.

Depending on the model, either the pilot controls the twin FFAR rocket pods or crew chiefs man the side door M134 miniguns:

NOTE: Only available on the UH-60 (FFAR) variant.

Unguided air-to-ground 70 mm rocket pods. Forward-facing only, but is strong against groups of infantry and unarmoured/lightly-armoured ground vehicles.

The pods are capable of firing off one rocket every 0.2 seconds. The rockets have initial launch velocities of 44 m/s and can reach a top speed of 1,000 m/s in mid-flight. The warheads are HE-based and have a blast radius of 12 metres.

NOTE: Only available on the baseline UH-60 and UH-60 (RACS) variants.

The M134s can toggle between two fire modes:

They always have a fixed dispersion of 0.015 rad regardless of distance. Muzzle velocity is set to 900 m/s. Rotation arcs are limited depending on which direction the guns are mounted to face, but for horizontal rotation it is always a maximum of 150 degrees for both left and right. Vertical rotation however, is restricted to an elevation of 25 degrees and a depression of 80 degrees.

The UH-60M Black Hawk is exclusively operated by U.S. Army forces in ArmA 2. It was added with the release of the Operation Arrowhead expansion pack.

The UH-60M is the latest iteration of the Black Hawk family that was designed to replace the UH-60A. The UH-60M provides additional payload and range, has an enhanced avionics suite, and has easier handling due to using a new composite spar wide-chord blade.

General improvements to the cockpit were also made with the inclusion of multi-functional displays.

Features
It is available in two variants; the standard armed troop transport model, and a unarmed sub-variant that is designed to ferry and provide medical assistance to wounded troops.

The armed variant of the UH-60M is equipped by default with twin miniguns fitted to both of the side doors positioned just behind the cockpit. Each minigun feeds from a single 2,000 round 7.62 mm belt for a combined total of 4,000 rounds.

Both function and purpose-wise, the UH-60M is mostly identical to its Armed Assault predecessor and the USMC's MH-60S in several ways.

It is designed to be able to drop off an entire squad's worth of troops in one go (with additional seats to spare), suppress enemies with its mounted weapons, and evacuate troops from any kind of landing zone.

Drawbacks
One downside to the ArmA 2 UH-60M is that a dedicated, rocket pod-equipped variant is no longer available. This means that the UH-60M is exclusively limited to being a transport helicopter and can no longer serve as a rudimentary light gunship.

Crew Capacity
Regardless of the variant, the UH-60M always has a seating capacity of two for a crew that consists of the pilot and a co-pilot; the latter actually being considered as the fourteenth or eighth passenger depending on the variant. 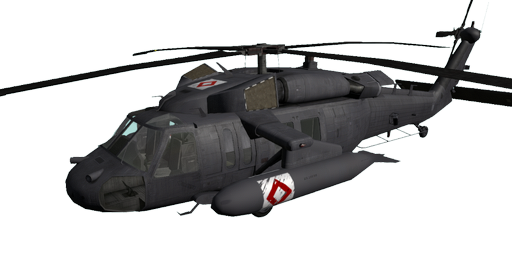 This variant can be identified by its high-visibility red crystal markings located on the front and both sides of the airframe.

It is mostly identical visually and functionality-wise to the baseline UH-60M, but has stub wings attached to both sides of the fuselage where the door gunners would be that carry (purely cosmetic) external fuel tanks on pylons. It can transport up to seven passengers.

Both variants of the Black Hawk have base armour values of 35.

The hull can withstand 35 points of damage.

The engine will be disabled if it takes more than 8.75 points of damage. A damaged engine will suffer from reduced power output.

The cockpit's flight instruments can only take 5.25 points of damage before failing.

The main rotor can only withstand 10.5 points of damage. Disabling the main rotor will prevent the pilot from being able to maintain lift. 30% of damage is always transferred onto the main "health" pool of the Black Hawk.

The tail rotor is limited to taking just 7 points of damage. Disabling the tail rotor will prevent the pilot from being able to control the main rotor's torque. At least 10% of damage will be shared with the main "health" pool of the Black Hawk.

NOTE: Only available on the baseline UH-60M variant.

It has a variable fire rate depending on the selected fire mode:

Muzzle velocity is set to 900 m/s for both M134s. Accuracy-wise, they have fixed dispersion values of 0.0017 rad against targets at distances of up to 800 metres away.

Rotation limits depend on where the guns are mounted but horizontally are always restricted to 183 degrees in both directions. Vertically however, this is limited to an elevation of 30 degrees and depression of 60 degrees only.

No variants of the Black Hawk possess a Missile Approach Warning System, and will not alert the pilot of incoming missiles that are already mid-flight and locked onto it.

The Black Hawk has a Radar Warning Receiver, and will alert the pilot of being locked onto by radar-based targeting systems.

The Black Hawk has an Infrared Warning Receiver, and will alert the pilot of being locked onto by infrared-based targeting systems.