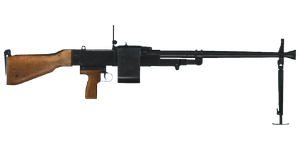 The UK-59 is a 7.62 mm general-purpose machine gun used exclusively by Czech military forces in ArmA 2. It was added with the release of the Army of the Czech Republic DLC.

The UK-59 is a belt-fed, gas operated medium machine gun with a tilting breechlock that is chambered to fire the 7.62×54 mm cartridge.

It loads from the same 100-round belts stored in metal boxes used by the Russian-made PKM, is able to attain a fire rate of up to 667 rounds per minute and has a muzzle velocity of 850 m/s. The UK-59 has an integrated (non-functional) bipod, but does not come in any variant that has either optical sights, muzzle attachments, or side rail accessories mounted. It has a maximum zeroing range of up to 800 metres.

The standard issue GPMG of the Czech military, it is a fairly powerful MMG due to firing the same 7.62 mm round used by the PKM, and is effective at distances of between 800 and up to 1,000 metres.

However, in terms of actual performance the UK-59 is completely identical to the PKM. From accuracy to recoil and even right down to carrying weight, the UK-59 remains unchanged from the PKM. The sole difference with the UK-59 is that it cannot be zeroed to 1,000 metres like the PKM (which is actually a drawback).

As a result, the UK-59 shares the same flaws of the PKM and has almost none of its advantages, rendering it a comparatively inferior weapon to not only the PKM itself but every other GPMG as well.

The UK-59 can only load type of "magazine". It will require two free inventory slots to carry:

Metal box containing a linked belt with 100-rounds of 7.62 mm ammunition. It is shared with both of its Russian-made counterparts.

Vehicle-mounted UK-59. Note the lack of a wooden stock contrasted against the man-portable version.