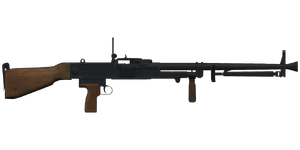 The UK-59L is a 7.62 mm general-purpose machine gun used by both the CSLA and with FIA guerillas in ArmA 3. It was added with the release of the CSLA Iron Curtain Creator DLC.

The UK-59L is a gas operated medium machine gun that uses a tilting breechlock. It is chambered to fire the 7.62×54 mm cartridge.

It loads from 50-round belts stored in metal boxes, and is capable of attaining a fire rate of ~ 952 rounds per minute with a muzzle velocity of 805 m/s.

The UK-59L can be fitted with a telescopic sight that has a fixed magnification of 4x and utilises an integral folding bipod. However, it cannot mount suppressors onto its muzzle, nor be fitted with night vision-enabled optics.

If a scope isn't mounted onto the UK-59L, its ironsight can be used instead. It can be zeroed starting at a minimum of 100 metres up to a maximum of 2,000 metres.

UK-59Ls in this configuration are mounted onto raised tripods. They have a lower rate of fire that caps out at ~ 750 RPM.

The tripod allows for the operator to fully rotate it in any direction horizontally. However, vertical limits are more restrictive and only allow for elevation/depression angles of 75/15 degrees (respectively).

Static UK-59Ls have access to fifteen 50-round belt boxes for a combined total of 750 rounds. They are fitted with magnified day sights that have a fixed magnification of 4x.

It is not possible to toggle a night vision mode with the sight, though it does allow the operator to manually zero starting a minimum of 100 metres up to a maximum of 1,000 metres.

Note that the UK-59L cannot be disassembled into a man-portable backpack form.

The UK-59T is another static turret configuration of the UK-59L but utilises a low mount configuration instead. Just like the static UK-59L, it has a lower ROF that is capped at ~ 750 RPM.

The tripod allows for the turret to be swivelled in either direction horizontally up to a maximum of 24.5 degrees. It is restricted to a vertical elevation/depression of 30/7 degrees (respectively).

By default, static UK-59Ts are pre-loaded with one 250-round belt box and have just two extras in reserve (one with heavy tracers and another with API ammo). They can be manually rearmed with spare 250-rounder "magazines" by simply manning the turret while carrying them.

Like static UK-59Ls, UK-59Ts are also fitted with magnified day sights that have a fixed magnification of 4x. They cannot toggle enhanced vision modes but can be manually zeroed starting at a minimum of 100 metres up to a maximum of 1,000 metres.

It should be noted that unlike the high mount UK-59L, it is possible to disassemble the UK-59T into a man-portable form to relocate it at a moment's notice. In this form, the UK-59T is a standalone component and does not require a separate backpack to reassemble.

Handheld UK-59Ls are capable of feeding from six types of "magazines". No matter the type of ammunition loaded, they all share identical weights of 18 "mass" units.

Static UK-59Ls/UK-59Ts can also feed from six types of "magazines" that use 250-round belts (optionally divided up into five individual 50-round metal boxes). They are much heavier and weigh 75 "mass" units.

Upon manning either static weapon, they are automatically added to the turret's stockpile (this can be used on both depleted and non-depleted turrets). However, it should be noted that 50-round/250-round belt "magazines" intended for either handheld or static UK-59s cannot be shared with one another:

NOTE: The following "magazines" are NOT interchangeable with static UK-59s.

Alternate belt with a mixed load of non-tracer and visible tracer ammunition.

Every fourth round fired will consist of a visible tracer. Only the last six rounds of the belt are exclusively tracers.

As with tracer belts, this belt also uses a mixed load of non-tracer and visible tracer rounds (with one tracer for every four rounds fired). The last six rounds of the belt will comprise entirely of tracers.

The velocity of these rounds are significantly lower than that of regular ball loads (745 m/s).

Alternate tracer belt that uses heavy ball rounds. It is statistically identical to regular heavy belt "magazines" and also has a lower muzzle velocity of 745 m/s.

The difference is that it has one visible tracer for every four rounds fired. Only the last six rounds of the belt will consist solely of visible tracers.

Dummy "magazine" intended for use in training exercises.

Does not inflict damage to targets and is unable to pierce armour.

NOTE: The following "magazines" are NOT interchangeable with handheld UK-59Ls. Only the low mount UK-59T can use the default capacity of 250 rounds. The high mount UK-59L will automatically split the 250-round belt into five 50-round belts upon manning the turret.

Will be split into five 50-round metal boxes for the UK-59L.

Every third round fired will always comprise of a visible tracer. Only the last ten rounds of the belt consist solely of tracers.

Rounds fired from this "magazine" have a much lower velocity of 765 m/s rather than 830 m/s.

The fourth round fired from each belt will be a visible tracer. Only the last ten rounds of the belt will comprise of entirely of tracers.

Dummy "magazine" intended for use in training exercises.

Rounds fired from this "magazine" cannot inflict damage, are unable to pierce through armour plating, and do not emit any tracers.