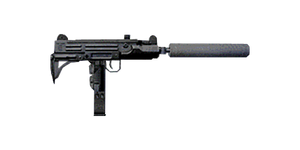 The UZI is a 9 mm submachine gun used by both the Nogovan Partisans and in limited numbers with U.S. special forces in ArmA: Cold War Assault.

The UZI is a blowback-operated, selective-fire submachine gun with an open bolt design. It is chambered to fire the 9×21 mm round.

It loads from 32-round box magazines, and can attain a fire rate of up to 600 rounds per minute with a muzzle velocity of 400 m/s. The UZI is fitted with a sound suppressor by default, and has a maximum effective range of up to 200 metres.

A relatively compact personal defence weapon, the UZI's main strength stems from its large magazine size capacity. It is particularly formidable in close quarters due to its high fire rate and decent accuracy over moderate ranges (for an SMG).

Like the MP5SD3 and the Soviet PP-19, the UZI is also suppressed and can be brought to missions that require stealth.

Although it is intended for use in close quarters, the UZI is surprisingly quite accurate and can be utilised against targets at ranges of between 150-200 metres away. However, it should be noted that the UZI has noticeably higher recoil than its American/Soviet-made counterparts. Outside of close quarters, the user should always fire in short bursts of 2-3 rounds in order to maintain some semblance of accuracy.

The UZI can only be loaded with one type of magazine. It requires one inventory slot to carry: