The V-44X Blackfish is a multi-purpose VTOL transport used by Pacific NATO forces in ArmA 3. It was added with the release of the Apex DLC.

The Blackfish is a multi-mission tiltrotor aircraft that uses one three-bladed proprotor, turboprop engines fitted on the end of each wing.

It has both VTOL and STOL capabilities; both for take off and landing, and can operate as a helicopter with the nacelles orientated vertical and rotors horizontal.

Features
It is available in three variants; a dedicated gunship version that has multiple weapons mounted on it, and two transport variants that are designed to carry either infantry or vehicles (respectively).

Combining the flexibility of a rotary-wing helicopter and the speed of a fixed-wing jet, the Blackfish is a uniquely designed VTOL transport/gunship aircraft.

It can fulfil a variety of roles ranging from transporting troops or vehicles into battle, or providing persistent close air support as a (literal) flying gun turret. All variants also possess a nose-mounted targeting pod with an integrated laser designator which can be used to mark targets for friendly forces.

Notable Traits
Unlike its CSAT counterpart, it has a significantly greater cargo capacity and can carry twice as many troops or vehicles. In fact, a single Infantry-only Blackfish can paradrop up to thirty two soldiers into battle which is double the Y-32's maximum capacity.

This is almost four full-sized squads worth of NATO forces; an impressive feat that remains unmatched by any other aircraft or ground vehicle transport in ArmA 3.

Last but not least, it is the only Vehicle-in-Vehicle capable aircraft which can carry (most) medium-sized armoured vehicles like the AMV-7 Marshall IFV or the Rhino MGS tank destroyer.

It does not need to rely on slingloading to do so like most helicopters, which lowers the risk for the vehicle crew as they won't be exposed to dangers like anti-tank missiles/cannon fire while in transit.

Incidentally by ferrying in IFVs like the Marshall, any NATO infantry squad in the field can be quickly reinforced and transformed into a mechanised unit - a capability which is exclusive to NATO only.

Drawbacks
The Blackfish consequently has poorer manoeuvrability and is slower due to both the size of the fuselage and its wings being longer. This also means that it is restricted from landing in areas that lack enough clearance (i.e. building rooftops, small forest clearings, etc.) lest the rotors be damaged from contact with structures or nature.

It also cannot defend itself while transporting either vehicles or infantry, as only the dedicated gunship variant retains armament. But even when it's armed, the Blackfish is limited to firing upon targets on the left side of the VTOL; hostiles can simply attack the Blackfish without fear of retaliation while they remain outside of this "window".

Lastly, the Blackfish's extremely large dimensions make it undisputedly the worst when it comes to remaining hidden from electronic sensors. With an extremely high base RCS rating, it can be detected on radar at 180% (160% on infrared/visually) of the opposing sensor's default maximum range.

Crew Capacity
The Blackfish always has at least a seating capacity of four regardless of the variant. This consists of both the pilot and co-pilot, and either two gunners in the case of the armed variant, or two flight engineers/crew chiefs for the transport variants.

Note that while the cockpit crew can swap seats with each other, they cannot switch to the back of the aircraft (and vice versa), and none of the cockpit crew are able to eject in flight. As such, the Blackfish is limited to deploying no more than thirty two paratroopers at a time. 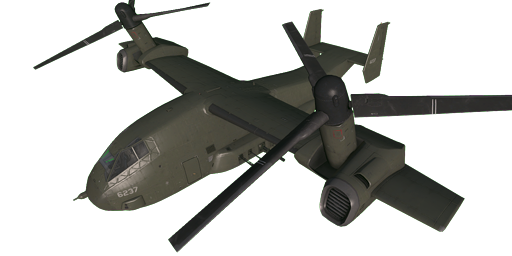 Armed variant of the Blackfish. Has two gunners who remotely operate its weapon systems through control panels in front of their seats. 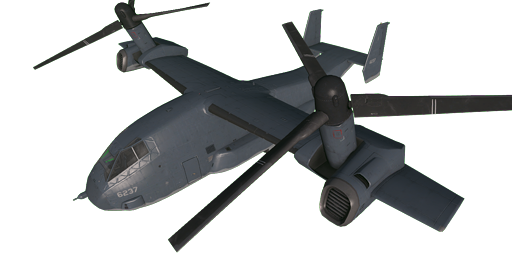 Its cargo space contains drop down seats fixed on both sides of the compartment. It is optimised to carry up to thirty two passengers but cannot airlift any vehicles. 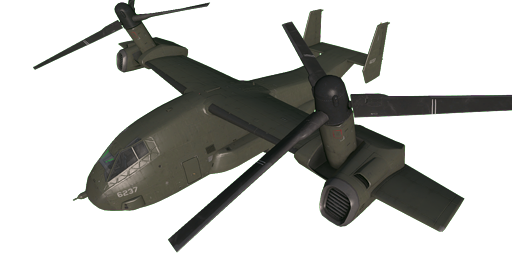 Unlike the infantry-only variant, this model's cargo space lacks seating and is instead optimised to airlift ground vehicles. No passengers other than the default number of crew can board this specific Blackfish variant.

All variants of the Blackfish have base armour values of 400.

The hull can incur up to 1,200 points of damage. 50% of damage is always shared with the Blackfish's main "health" pool. It takes 500% additional damage from high-explosive (HE) type munitions.

Depletion of the hull's integrity will not result in a total loss unless the Blackfish's "health" is at critical and all other primary components are destroyed.

The Blackfish's twin engines can resist up to 600 points of damage before failure. Both incur a 200% increased damage penalty from HE-type munitions. At least 25% of damage onto the engine will always be shared with the Blackfish's main "health" pool. It will not however, cause a total loss unless the Blackfish is in critical status.

Losing one engine will not prevent the Blackfish from flying but will make it increasingly difficult for the aircraft to maintain altitude.

If damaged: Power output is halved. Performing simple manoeuvres will take twice as long to complete.
If destroyed: Blackfish will lose all power and cannot maintain its altitude/vectoring capability.

The Blackfish's fuel tank can take up to 1,200 points of damage before rupturing. It takes 400% increased damage from HE-type munitions. At least 25% of damage is always transferred onto the Blackfish's "health" pool (it will not result in a total loss unless the Blackfish is at critical).

The cockpit's electronic systems can resist 1,200 points of damage before failure. At least 10% of damage will be shared with the Blackfish's main "health" pool.

If damaged: Periodic flickering of pilot Head Mounted Displays (HMD) and cabin Multi-Functional Displays (MFD). Other instruments remain unaffected.
If destroyed: HMDs disabled. MFDs and all other instruments will malfunction and may not display proper readings.

All six components can resist 600 points of damage before failing (individually). They take 300% increased damage from HE-type weapons.

Depending on which specific control surface is hit, the Blackfish's handling and agility will be degraded based on the severity of the component's damage. In some cases, vertical take-offs and landings may become outright impossible to control due to instability.

The Blackfish's sensors are meant to enhance its survivability against both air and ground threats, while augmenting its role as an air-to-ground fire support platform in the case of the armed variant:

It has an active radar range of 7 km against aerial targets and 4 km against ground targets. Azimuth/elevation coverage is limited to 240 and 110 degrees.

The radar has an elevation offset of 35 degrees. Targets can be identified once they move within 3 km range of the Blackfish.

Both IRST and visual sensors have a maximum detection range of 4 km against aerial targets and 3 km against ground targets. Azimuth/elevation coverage for both sensors is limited to an angle of 45 and 35 degrees (respectively) and have a minimum operating range of 500 m.

Both sensors are located inside the FLIR pod's camera which is placed beneath the nose of the Blackfish and is controlled by the co-pilot. It detects targets independently of the aircraft's heading.

The identity of their targets will be recognised once the Blackfish is within 2 km distance from them. Each sensor can only track targets that are moving at speeds of up to 270 km/h.

The LST can acquire laser marked targets within a full radius of 360 degrees horizontally, but is vertically restricted to just 120 degrees.

The sensor itself also has an elevation offset of 30 degrees.

For optics, both gunners have access to the same three fields of view and can toggle either a day, night or black-hot/white-hot thermal vision mode:

NOTE: Only available for the left gunner on the V-44X Blackfish (Armed) variant.

20 mm Gatling cannon. Fires high-explosive (HE) rounds that are effective against groups of infantry, unarmoured/lightly-armoured vehicles and low-flying helicopters.

NOTE: Only available for the left gunner on the V-44X Blackfish (Armed) variant.

It has a firing delay of 5 seconds in-between shots (12 RPM) and has a muzzle velocity of 1,330 m/s. Accuracy-wise, the Cannon 105 mm retains a dispersion of 0.001 rad regardless of range. The warhead for the HEAT-MP shells feature both an explosive charge and kinetic penetrator submunition. The explosive charge always detonates first upon impact and has a blast radius of 4.2 metres.

Both the FCS and manual zeroing specifications for the Cannon 105 mm are identical to those used by the Minigun 20 mm.

NOTE: Only available for the right gunner on the V-44X Blackfish (Armed) variant.

40 mm autocannon. Can load either HE or AP-type shells.

It has an effective firing range of 1,500 metres. The Cannon 40 mm can attain a fire rate of up to 200 RPM. There is no delay for switching between the different rounds, but it takes 40 seconds to reload the "magazine" for each individual type.

Accuracy-wise, dispersion will differ depending on whether AP or HE rounds are being used; for AP rounds dispersion is set at 0.0009 rad, while for HE rounds it has increased spread with a dispersion value of 0.0015 rad instead.

Both the FCS and manual zeroing specifications for the Cannon 40 mm are identical to those used by the Minigun 20 mm.

The Vehicle Transport variant is capable of loading any of the following ground vehicles, boats and drones:

For comparison, the Infantry Transport Blackfish has room for 34 passengers in addition to the pilot and copilot. The 30 passengers in the back are able to parachute out of the vehicle while in mid-flight. Likewise, this variant is also unarmed.

It should also be noted that small UAVs such as the Utility Drone will be ejected from the Blackfish with parachutes rather than immediately flying. Additionally, it is possible to combine some of the smaller vehicles with larger ones i.e. one UGV Stomper and two Quadbikes. The only caveat is that any combination of vehicles must still fit within the confines of the cargo bay (dimension, not weight, matters for any vehicle loads).

In addition to vehicles, the Blackfish is able to carry portable ammunition crates and supply boxes:

Cargo that is deployed whilst the Blackfish is flying will be airdropped via parachutes. If there is more than one object, they will be unloaded in a staggered fashion with a delay of ~ 3 seconds in-between drops.

The Blackfish is able to load the CH-67 Huron's supply containers along with the Mi-290 Taru's multi-mission pods.

It can only fit a single of these within the confines of the cargo hold, though smaller objects that do not exceed the hold's constraints can still be loaded alongside the container/pod.

However, it should be noted that while it can freely load all of the Huron's containers, the Blackfish is unable to load the Taru's Transport and Medical pods.

Interior view of the crew cabin.