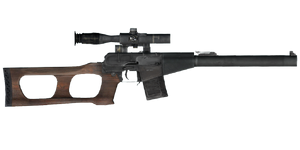 The VSS Vintorez is a 9 mm special purpose marksman rifle used exclusively by the Russian Spetsnaz in ArmA 2.

The VSS Vintorez is a gas operated, selective-fire marksman rifle that is chambered to fire the 9×39 mm cartridge.

It is able to load from either 10- or 20-round box magazines, and can attain a maximum fire rate of up to 750 rounds per minute on full auto with a muzzle velocity of 300 m/s. The VSS Vintorez has a PSO telescopic sight attached to it by default and uses an integrated suppressor, but otherwise does not support being fitted with any other accessories.

True to its name, the VSS Vintorez is a special purpose weapon that combines the attributes of a compact submachine gun like the Bizon with that of a short-range marksman rifle. Exclusively wielded by Spetsnaz operatives, it is very powerful at close ranges (300 metres or less) and has little recoil in addition to possessesing a high rate of fire that makes it deadly in close quarters.

Unlike other weapons which rely on muzzle-mounted suppressors, a highlight of the VSS Vintorez is its integrated suppressor. The muzzle flash is barely noticeable and combined with its usage of subsonic 9 mm ammunition, makes finding the source of a shot fired by the VSS Vintorez extremely difficult.

The lack of an audible supersonic crack or visible flash means that targets won't even realise that they're under fire until they actually get hit, and even then finding the shooter's location will be almost impossible; particularly if they're well camouflaged.

However, this advantage also serves as a double-edged sword, with the 9×39 mm round that it fires being extremely slow even by the standards of other subsonic rounds. Noticeably, the rounds can take an upwards of anywhere from 1.5-2 seconds of flight time to hit their targets, even at a close distance.

Combined with its already low muzzle velocity, this restricts the maximum range of the VSS Vintorez to under 400 metres or less. But in practice, this means that its real effective range is just 200 metres, as beyond that distance the 9 mm round begins to lose its energy rapidly and will no longer retain its accuracy or damage.

The VSS Vintorez can load two types of magazines. Both require one inventory slot to carry: