Vahid Namdar is a minor antagonist in ArmA 3's The East Wind campaign.

Namdar served as leader of Mediterranean CSAT forces deployed to the island nation of the Republic of Altis and Stratis. He commanded the Iranian-led Griffin Regiment.

Prior to the U.S.-led NATO invasion of Altis, Namdar's command post was situated at the Altis International Airport where he directed all joint Altian/Iranian counterinsurgency operations against the so-called "Freedom and Independence Army" (FIA).

Following the airport's capture by NATO forces on August 9th, he was forced to relocate his command post towards the southern peninsula of the island. Established at Selekano, he ordered all remaining CSAT troops to stand down and to avoid further conflict with NATO forces. Any units which could not retreat in time were to disarm themselves and surrender peacefully.

In the meantime, all science team members involved in the development of "Project Eastwind" were to be airlifted out of the country at Selakano's airfield. The prototype itself would be disassembled and shipped out by the Regiment's elite Guards.

To buy his men as much time as possible, Griffin Regiment handed over the last of their advanced T-140 tanks to the Altians. Eventually, Namdar and the Regiment's remaining personnel departed from Altis, and the Altian leader officially declared his intent to surrender unconditionally to the Americans.

Several days after the conflict's resolution, Namdar would be present alongside representatives from NATO, the new Altian president-elect, Nikos Panagopoulos, and former leader Colonel Georgious Akhanteros at the old capital of Kavala.

Together, they will ratify the agreement of a joint peacekeeping deal that would oversee the complete demilitarisation of the hardline Altian military.

Namdar appears to be a middle-aged Iranian male with dark skin, a faint beard and trimmed black hair.

He dons the standard attire of a Mediterranean CSAT officer which consists of Brown Hexacam-camouflaged officer fatigues, but does not wear the standard black beret and chooses to wear a camouflaged field cap instead. 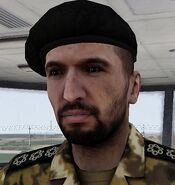 Namdar's alternate and unused in-game face. Note how his face is just reused from one of the generic Altian identities.