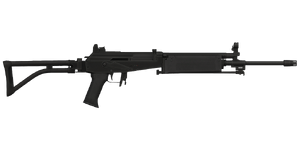 The Velko R4 is a 5.56 mm assault rifle used by UNA peacekeepers and in limited numbers with North African CSAT crewmen in ArmA 3. It was added with the release of the Western Sahara DLC.

The Velko R4 is a selective-fire assault rifle chambered to fire the 5.56×45 mm NATO cartridge.

It loads from either 35-round box magazines or 50-round extended magazines. It has a muzzle velocity of 925 m/s, and can attain a rate of fire that ranges between 600 (semi) up to approximately ~ 675 (full auto) rounds per minute.

The Velko R4 allows for optical sights to be fitted onto its top rail and can also mount a sound suppressor. However, because it utilises an integral folding bipod, it does not require a separate bipod to be mounted. Additionally, it lacks a side rail and cannot be customised with flashlights or laser pointers.

The Velko R4 supports only two types of magazines. They do not have alternate camouflage options.

It should be noted that none of its magazines are compatible with other 5.56 mm platforms. Both are restricted to only the Velko R4 and cannot be fed into any other 5.56 mm weapon:

Standard 35-round magazine loaded with 5.56 mm ball ammunition. It has a weight of 9 "mass" units.

Only the last four rounds of the magazine consist of visible tracers.

Extended capacity 50-round magazine. It is heavier and weighs a total of 14 "mass" instead.

Aside from its increased capacity/weight, it remains identical to regular 35-rounder magazines.

Velko R4 loaded with a 50-round magazine.