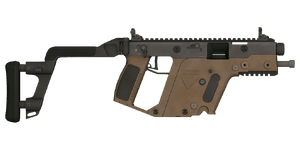 The Vermin is a .45 submachine gun used exclusively by NATO forces in ArmA 3.

The Vermin is a personal defence weapon that uses a delayed blowback, closed bolt operation, and is chambered to fire the .45 ACP round.

It loads from 30-round box magazines and can achieve an impressive fire rate of up to 1,200 rounds per minute, with a muzzle velocity of 280 m/s. The Vermin can be fitted with optical sights on its top rail and can also mount attachments onto its muzzle. Although it does not have a side rail to attach laser pointers, it can fit a custom-designed flashlight in the notch located just above the end of the barrel.

With the exception of the ADR-97, the Vermin is generally superior to all other submachine guns in close quarters due to its (relatively) greater damage output and to high rate of fire. However, this advantage somewhat falls off at distances of 200 metres and beyond; particularly against armoured targets and solid objects such as wooden walls.

Nonetheless, it retains the highest fire rate out of all SMGs and being relatively compact, makes for an excellent weapon for both vehicle crews and when fighting in close quarters.

The Vermin only accepts a single magazine type. It has a "mass" value of 10 units: