The Viper Harness is a REDFOR backpack used exclusively by Viper Team operatives in ArmA 3. It was added with the release of the Apex DLC.

The Viper Harness is a medium-sized backpack worn by units from CSAT's Viper special operations teams. Depending on the variant, it has a variable maximum storage capacity and also drains a variable amount of the wearer's stamina (unloaded).

Both variants of the Viper Harness possess average capacity-to-stamina ratios. The Light variant for example, has 20 less capacity than the Kitbag despite weighing only 5 "mass" less (unloaded).

In turn, the regular Viper Harness also carries 20 capacity less than the Carryall while weighing only 5 "mass" units less as well. When unloaded, the basic Viper Harness weighs 55 "mass" while the Light variant has a weight of 45 units.

Their main advantage lies in their sleek shape which makes the wearer's silhouette stand out less. This is particularly noticeable when the carrier is attempting to conceal themselves amongst grass fields. So as long as they remain prone, the wearer can stay mostly hidden from view, whereas a larger backpack will increase their visibility to enemy troops. 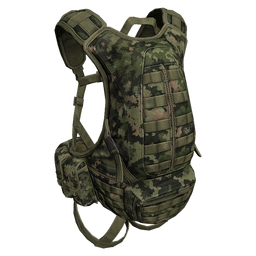 Regular variant. Has a maximum carrying capacity of 300 "mass" units. 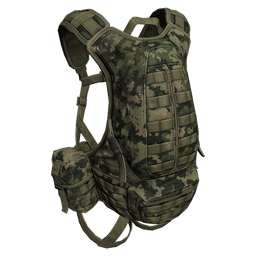 Lighter version with less pouches fitted onto the belt straps and weighs less overall (stamina-wise). This variant has a maximum capacity of only 260 "mass" units.