The Vodnik is an Infantry Mobility Vehicle used exclusively by the Russian Armed Forces in ArmA 2.

The Vodnik is a mobile multi-functional vehicle that puts a new spin on the light army truck concept.

Unlike other vehicles in its class, the Vodnik is designed with modularity in mind, and can be utilised as a personnel transport, convoy escort, and reconnaissance/off-road patrol vehicle.

Features
It is available in three variants:

Although it can technically be considered as the Russian counterpart to the HMMWV, the Vodnik doesn't truly have a proper equivalent to it.

It is better protected than the likes of the HMMWV, UAZ and Jackal combined. However, all variants of the Vodnik lack the survivability of the BTR-90 since Improvised Explosive Devices (IED) and anti-vehicle weapons can easily destroy it.

Its main advantage lies in its BPPU sub-variant which packs a 30 mm autocannon that is superior to the 12.7 mm heavy machine guns used on the former platforms.

Adding onto this is its ability to deploy smoke grenades, which further enhances the crew's chances of surviving combat against enemy armour.

Overall, the Vodnik occupies a small niche role-wise between lighter vehicles and Armoured Personnel Carriers. Rather than replace dedicated utility cars like the UAZ, it is best utilised as a light fire support vehicle, or as a scout car that doesn't require protection from enemy vehicles.

Mobility
Vodniks are amphibious-capable and are just as fast as the BRDM-2. However, the Vodnik has considerably poorer acceleration and handling in comparison, and is prone to flipping at high speeds or sharp turns.

Crew Capacity
The Vodnik always has enough seats for two that consists of the driver and a single passenger who sits alongside them in the front-right seat. Additional passenger seating and positions for crew members (if applicable) varies depending on the model. 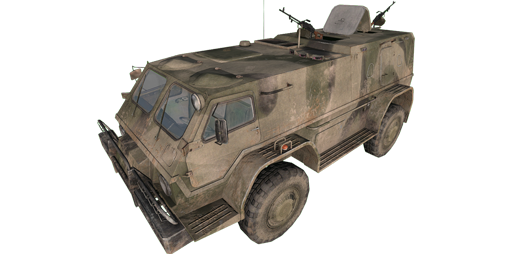 Armed with two 7.62 mm PKT machine guns; one facing forward and another to the rear. The standard loadout of the MG-armed variant gives it one 100-round belt box of 7.62 mm ammunition, and a further five boxes in reserve for both gunners.

This variant can transport up to ten passengers at once. 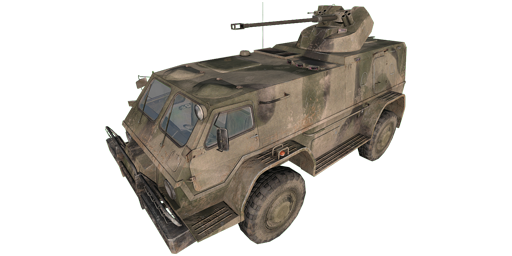 Mostly identical to the MMG armed variant, but has a BPPU turret fixed to the roof of the vehicle instead that is armed with a 30 mm autocannon and coaxial 7.62 mm PKT MMG. The turret is operated remotely from within the vehicle by a dedicated gunner.

The 2A42 autocannon can fire either armor-piercing (AP) or high-explosive (HE) shells, and has a combined total of 300 rounds (150 of each type). On the other hand, the coaxial PKT feeds from a single 1,500 round belt and cannot be reloaded with a supply truck/crate.

For defensive purposes, the BPPU variant is specifically capable of deploying smoke grenades to conceal itself. It can only transport two passengers at a time, and has a crew that consists of the driver and gunner (for a total of four seats combined). 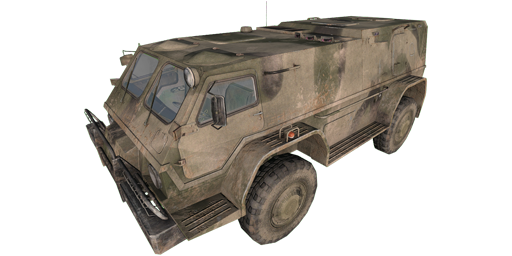 It is completely unarmed and can only transport three passengers at a time (not including the driver).

All variants of the Vodnik have base armour values of 100.

Note that with the exception of the turret, component hitzones remain identical on the Vodnik (2xPK) and Vodnik (Ambulance) variants.

Vodnik hulls can survive up to 100 points of damage.

Their engines are able to withstand 40 points of damage. 20% of damage is always shared with the vehicle's main "health" pool.

A damaged engine will prevent the vehicle from being able to attain their top speeds.

The fuel tanks on every Vodnik variant can incur only 30 points of damage before rupturing. At least 50% of damage is always shared with the vehicle's main "health" pool.

A damaged tank will cause the vehicle to gradually lose fuel over time.

All tyres can only take 15 points of damage before bursting. At least 30% of damage is shared with the vehicle's main "health" pool.

The BPPU variant's turret can resist up to 80 before failing. At least 50% of incoming damage will be transferred to the Vodnik's "health" pool.

NOTE: For specifics on the 2A42's munitions, see its related section listed here.

The gunner position controls all weapon systems on the BPPU variant. In the case of the 2xPK variant, two gunners each man the twin PKT machine guns:

NOTE: Only available on the Vodnik (BPPU) variant.

The 2A42 30 mm autocannon has an effective firing range of 1,500 metres. It can switch between either HE or AP-type munitions but requires 10 seconds to finish reloading.

It can attain a variable fire rate depending on two modes:

Both modes have identical dispersion values of 0.0005 rad regardless of distance. Rounds are always fired in bursts of 5 no matter the selected mode (unless the 2A42 is out of ammunition).

The PKT medium machine gun is available either as a coaxial weapon on the BPPU variant or as standalone MMGs on the 2xPK variant.

It can attain a fire rate of 800 RPM with a muzzle velocity of 900 m/s. Accuracy-wise, dispersion is always fixed at 0.00125 rad regardless of range. It takes 5 seconds to finish reloading whether it's a new linked belt or belt box.