The WY-55 Hellcat is a multi-purpose light utility helicopter used by the AAF in ArmA 3.

An alternate variant is also used by the Livonian Defense Force and is designated as the WY-55 Czapla. It was added with the release of the Contact DLC.

The Hellcat is a four-bladed, twin-engined rotary-wing helicopter that is capable of serving in many roles.

These range from providing air-to-ground fire support as a light gunship, ferrying troops and cargo into battle as a utility transport, and even as an anti-tank/ship helicopter when outfitted with guided missiles.

Armament
By default, the armed version has twin M134 miniguns and DAR rocket pods mounted on its stub wings. The miniguns are fed from a linked belt stored in a crate that has 5,000 rounds of 7.62 mm ammunition, while the DAR pods are loaded with 24 unguided rockets (combined).

Both pylons (1-2) can have their default loadouts changed at the pilot's discretion, and support being fitted with any of the following types of munitions and weapons:

Mobility
Manoeuvrability-wise, the Hellcat lacks the agility of the MH-9, while transportation-wise it cannot load as many passengers as the PO-30 due to having a much smaller cabin space. Its rotors are also louder in-flight compared to the PO-30, and can be heard flying in from a greater distance.

Notable Traits
The Hellcat does retain the most powerful engines out of the three which enables it to achieve and maintain the highest flight speed. Increased engine power and having the largest airframe also allows it to carry a much more diverse array of heavier munitions as well.

Unlike its armed NATO counterpart, the Hellcat does not need to sacrifice any passenger seating for armament as both armed and unarmed variants retain the same amount of space. Another unique aspect of the Hellcat is that it has a FLIR pod fitted to the nose of the helicopter. The pod enables the co-pilot to observe nearby surroundings, and can track ground targets via infrared as needed.

Drawbacks
Although the Hellcat possesses the ability to mount Skalpel ATGMs, it is only armed with unguided anti-personnel/anti-unarmoured vehicle rockets by default. Even when fitted with ATGMs, its lack of a proper IRST sensor makes targeting difficult as the pilot can only lock-on using the missile's seeker (which have a very tight field of view).

Furthermore, no part of the airframe is particularly well-armoured, meaning that infantry small arms can still injure or outright kill both the pilot and co-pilot. As a result, the Hellcat can only serve as a light gunship at best, and cannot match the capabilities of dedicated attack helicopters like the Mi-48.

Crew Capacity
Regardless of the variant, the Hellcat always has a seating capacity of eight personnel. This includes both of the crew members which consist of the pilot and co-pilot. 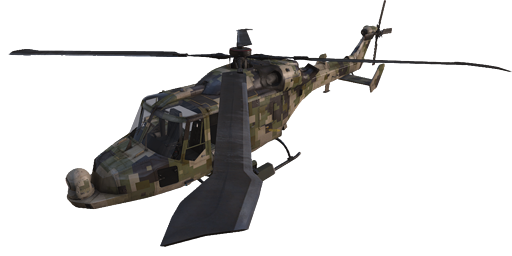 Baseline variant. Armed with twin miniguns and rocket pods mounted on stub wings fixed to both sides of the fuselage. It can transport up to six passengers (not including the the crew). 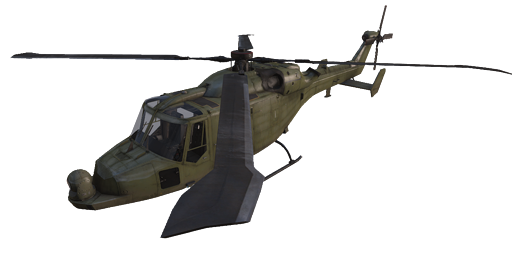 Unarmed variant. The two stub wings are removed on this version, but is otherwise completely identical function-wise to the baseline variant. 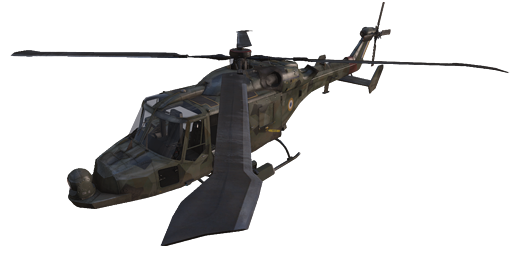 Identical to armed AAF Hellcats, but exclusively operated by the LDF only.

The sole difference with Czapla is the usage of red-coloured tracers for the twin Miniguns. It remains unchanged in all other aspects. 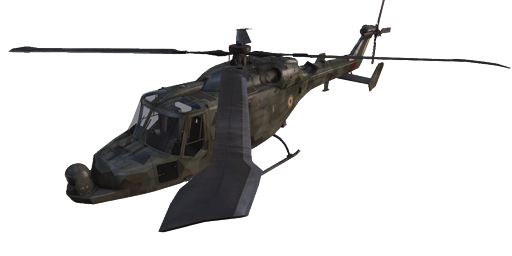 Identical to unarmed variants of the AAF Hellcat aside from the using the LDF's camouflage scheme.

AAF Hellcats have access to the following camouflage options:

LDF Czaplas are restricted to the following schemes only:

Both variants of the Hellcat have base armour values of 40.

Hull damage is calculated based on the integrity of other components on the Hellcat. Until all other parts of the helicopter have been critically damaged, the hull itself can never be "destroyed".

Each of the Hellcat's engines can survive 40 points of damage (total of two). They take 300% increased damage from high-explosive (HE) type weapons.

If damaged: Reduced power output and makes it difficult to gain both speed and altitude.
If destroyed: Can potentially blow up the Hellcat instantly if overall status of helicopter is at critical.

The Hellcat's fuel tank can only take a mere 28 points of damage before rupturing. It takes 200% increased damage from HE-type weapons.

A damaged fuel tank will not cause a total loss unless damage levels are already at critical.

Consists of the pilot/gunner flight instruments, Multi-Functional Displays (MFD) and Helmet Mounted Displays (HMD). They can incur 52 points of damage before failure.

If damaged: Occasional flickering of MFDs and pilot HMD. Other instruments unaffected.
If destroyed: MFDs and HMD disabled. Instruments may not display proper readings.

The main rotor can resist up to 104 points of damage before destruction. It takes 250% increased damage from HE-type weapons.

A disabled main rotor makes it increasingly difficult to maintain the Hellcat's lift. Unless the tail rotor has also been disabled however, the Hellcat can still be (reasonably) controlled at low airspeeds.

The tail rotor can resist up to 60 points of damage before failure. It will take 600% increased damage from HE-type weapons.

A disabled tail rotor will drastically increase torque from the main rotor. At low airspeeds, the Hellcat will become extremely difficult to control due to constant yaw shifting to one side.

Designed exclusively for transporting troops, the Hellcat has only one type of sensor available:

The Hellcat does not use an active radar as it does not have any weapon systems that would require one.

The Hellcat does not have the ability to detect targets visually or through IRST.

The Hellcat does not have the ability to lock onto laser marks or infrared strobes.

NOTE: Only weapons fitted by default on the Hellcat are displayed here. Ordnance and weapons equipped via the dynamic loadouts mechanic are not listed here.

NOTE: Only available on the baseline Hellcat variant.

The Hellcat's primary weapon. They can attain fire rates of up to 1,800 rounds per minute, and have a fixed dispersion of 0.0092 rad. 15 seconds will be required to reload a fresh belt (assuming all 5,000 rounds have been already depleted).

Neither minigun can be removed from the Hellcat's pylons and are permanently fixed to its stub wings.

NOTE: Only available on the baseline Hellcat variant.

The Hellcat has a maximum weight capacity of 2,000 kg and is only capable of slingloading and transporting a small variety of vehicles and equipment.

The Hellcat's lifting capabilities are quite mediocre due to its very small weight limit which prevents it from lifting any useful military vehicles. In comparison to the AAF's own medium-lift Mohawk helicopter, the Hellcat is largely restricted to modified civilian transport vehicles, which makes it a poor choice of transport for airlifting cargo around.