The XM8 series is a modular assault rifle used exclusively by ION private military contractors in ArmA 2. It was added with the release of the Private Military Company DLC. 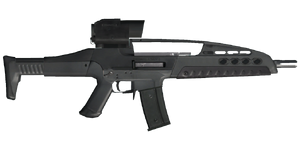 The XM8 is a 5.56 mm assault rifle used exclusively by ION PMCs in ArmA 2. It was added with the release of the Private Military Company DLC.

The XM8 is a gas operated, selective-fire assault rifle with a rotating bolt that is chambered to fire the 5.56×45 mm NATO round. It forms the baseline model on which all other sub-variants of the XM8 are based on.

It can load from either 30-round STANAG or G36-type plastic magazines, is able to attain a fire rate of up to 760 rounds per minute, and has a muzzle velocity of 920 m/s.

It uses an integrated non-magnified reflex sight that can project an IR laser, and can be zeroed up to a maximum range of 800 metres by default. Some variants can accept muzzle suppressor attachments.

Designed to be a modular weapons platform that can be easily adapted for different battlefield roles, the baseline XM8 (like its sub-variants) is a lightweight rifle prototype that was meant to replace both the M16A4 and M4A1. Unlike its older counterparts, the XM8 does not rely on externally-mounted accessories and uses an integrated optical sight which also combines a laser pointer for use in night fighting.

In terms of recoil management, it's comparable to the M16A4 and is very easy to control even when firing on full auto. In addition, it is far more accurate than the M16A4 while having less dispersion when shooting at targets that are at distances of up 450 metres away.

Unique to just the XM8 itself, it retains a 2-round burst mode that has almost unnoticeable recoil, and can fire as if it was on full auto while having overall less recoil than firing on full auto (depending on how fast the user pulls the trigger).

The baseline XM8 also features an additional sub-variant called the XM8 CQC. Virtually identical in all aspects, its main difference is the addition of accessory rails that allow it to be fitted with optics other than its default integrated sight like the HWS holographic sight. This sub-variant can also be fitted with a flashlight and foregrip as well.

The primary downsides to both variants are their mediocre fire rate, which pales in comparison to the M16A4 (on burst). In addition, while all variants of the XM8 have an integrated optic/laser pointer, it lacks the ability to mount medium range riflescopes like the ACOG with the exception of the LTWS thermal scope (on the XM8 TWS SD), which makes it less useful in medium-ranged firefights that extend beyond 400 metres. 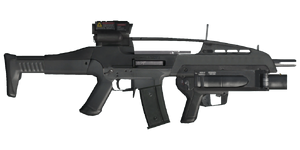 The XM8 M320 is a 5.56 mm assault rifle used exclusively by ION PMCs in ArmA 2. It was added with the release of the Private Military Company DLC.

The XM8 M320 is a modified variant of the baseline rifle that has an underbarrel grenade launcher attached.

It is completely identical statistics-wise, and can load either the standard 30-round STANAGs or G36-type plastic magazines like its parent weapon. It is however, slightly heavier to carry due to the added weight of the M320 grenade launcher and is therefore less suitable for use in close quarters.

The M320 uses a conventional flip-up leaf sight and can be loaded with a range of 40 mm high-explosive (HE), less-than-lethal (LTL) flare, and non-lethal smoke grenade rounds at distances of up to 300 metres. 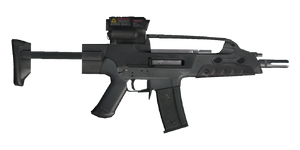 The XM8 Compact is a 5.56 mm carbine used exclusively by ION PMCs in ArmA 2. It was added with the release of the Private Military Company DLC.

The XM8 Compact is a carbine variant of the baseline XM8 rifle.

While it iss essentially a short-barrelled carbine variant of the XM8, the Compact is actually more comparable to being a personal defence weapon rather than an actual carbine. As such, it has a far shorter effective range of just 200 metres, while accuracy-wise it is similar to the M4A1. It is restricted to a default zeroing of just 100 metres and cannot be manually adjusted.

The Compact uses a (non-functional) collapsible stock and is also the only variant of the XM8 besides the baseline XM8 rifle itself that can accept other types of optical sights such as the HWS holographic sight, rather than relying solely on its integrated combat sight. It is also the only other variant that is capable of utilising an externally-fitted flashlight and foregrip. In all other aspects, it isn't too different from the baseline XM8. 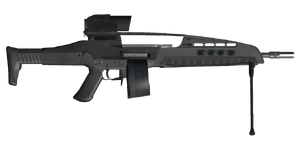 The XM8 Automatic Rifle is a 5.56 mm light support weapon used exclusively by ION PMCs in ArmA 2. It was added with the release of the Private Military Company DLC.

The XM8 Automatic Rifle is a modified variant of the XM8 that is configured specifically as a light support weapon. As with its parent weapon, it is also chambered to fire the same 5.56 mm NATO round.

The main differences with the XM8 Automatic Rifle are that it feeds from 100-round drum magazines as opposed to 30-round STANAGs/G36-type plastic magazines; although it can still be loaded with regular magazines if the need arises. It has a (non-functional) integrated bipod and cannot accept any type of optical sights or accessories other than its integrated reflex sight.

The XM8 Automatic Rifle has the highest fire rate out of all the XM8 variants, capable of outputting up to 857 rounds per minute. Like its marksman counterpart, the XM8 Automatic Rifle also uses a full-length barrel. However, it doesn't have the same degree of accuracy that the XM8 Sharpshooter has and is also the heaviest variant of the XM8 to carry, which makes it less useful in enclosed spaces as it's simply too bulky to comfortably wield in close quarters. 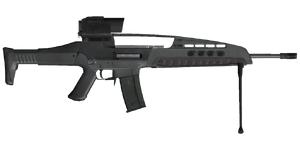 The XM8 Sharpshooter is a 5.56 mm designated marksman rifle used exclusively by ION PMC marksmen in ArmA 2. It was added with the release of the Private Military Company DLC.

The XM8 Sharpshooter is another modified variant of the XM8 rifle but has been configured specifically to serve as a designated marksman rifle. It is still chambered to fire the 5.56 mm NATO, though it differs in that it has a full-length barrel and a (non-functional) integrated bipod.

Unlike its parent rifle, it cannot be fitted with other kinds of accessories or optical sights except for its integrated telescopic sight. It has a default zeroing range of between 100 and up to 800 metres.

Compared to the XM8 Automatic Rifle, it is lighter to carry while being the most accurate variant out of all the XM8 variants. In addition, the XM8 Sharpshooter is unique for being the only model that is fitted with a magnified optic by default. This telescopic sight has a magnification strength of 4x, and enables the operator to engage targets that are up to 700-800 metres away with a high degree of precision.

The XM8 Sharpshooter cannot be suppressed, though it can still feed from STANAG/G36-type magazines loaded with subsonic ammunition.

For grenade rounds usable with the M320, refer to its dedicated article here.

All variants of the XM8 (including the XM8 Automatic Rifle) can be loaded with six types of 5.56 mm magazines. The 100-round drums take up two inventory slots but regular 20- and 30-round magazines use one slot only:

Standard 30-round plastic magazine. Also shared with the G36 family.

100-round Beta-C drum specifically intended for use with the XM8 Automatic Rifle variant.

Aside from its capacity it is completely identical to regular 30-round plastic magazines.

Alternate 30-round magazine used by M16A4 rifles and M4A1 carbines.

It is largely identical to the XM8's standard plastic magazines, but rounds fired from this magazine specifically have a slightly higher muzzle velocity of 930 m/s instead.

Brian Frost (left) can be seen armed with a customised XM8 CQC. Note the TPIAL laser pointer and barely visible foregrip behind it.