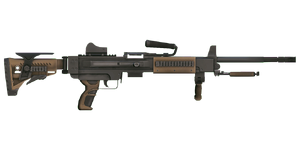 The Zafir is a 7.62 mm light machine gun used exclusively by Mediterranean CSAT forces in ArmA 3.

The Zafir is a belt fed, gas operated selective-fire light machine gun that is chambered to fire 7.62×54 mm rounds.

It feeds from 150-round linked belts stored in cloth pouches, and has a rate of fire of 952 rounds per minute (depending on fire mode) with a muzzle velocity of 860 m/s. The Zafir accepts top and side rail accessories but cannot mount any muzzle attachments. It has an integrated bipod fitted beneath the forward end of the handguard.

Despite its heavy recoil, the Zafir provides superb firepower in a small package for CSAT infantry squads. Because it is chambered in 7.62 mm as opposed to 6.5 mm, it outmatches the Mk200 in almost every situation - not only in terms of range, but also when it comes to stopping power and penetration.

The primary downside to the Zafir stems from its excessive recoil and heavier weight. It is more difficult to control when not firing from a stable position, and the number of reserve belts that the user can carry will be limited if they wish to avoid overburdening themselves.

In contrast, the Mk200 has fifty more rounds per belt, is very controllable even when firing on full auto, and is also much lighter to wield. Lastly, it is unable to mount a suppressor like the Mk200 is able to and as such, is ill-suited for scenarios that require stealth.

The Zafir can be fed with two types of belt pouches. They both have "mass" values of 50 units:

Contains one tracer for every five rounds. The last four rounds always consist of visible tracers.