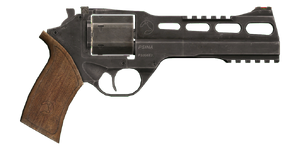 The Zubr is a .45 handgun used by CSAT forces and in limited numbers with Altian/Livonian criminal groups in ArmA 3.

The Zubr is a double-action revolver chambered to fire the .45 ACP round.

It loads from 6-round cylinders, and is only capable of reaching a fire rate of up to 240 rounds per minute with a muzzle velocity of 480 m/s. The Zubr supports being mounted with the Yorris J2 red dot sight designed exclusively for mounting on the small rail just above the barrel. It cannot be fitted with muzzle attachments but has an underbarrel rail that supports flashlight accessories.

The weapon of choice of CSAT officers, the Zubr is a relatively powerful heavy pistol that has both good stopping power and range due to utilising the .45 ACP cartridge. Controllable recoil, a high muzzle velocity, and the ability to mount optics makes the Zubr effective up to a range of 64 metres.

However its biggest drawback stems the Zubr itself being a revolver. With a total capacity of just 6 rounds (the least out of all handguns) the operator will quickly run out of ammunition during a firefight and be forced to constantly reload. The other downside is its double-action operation; the cylinder must rotate after the trigger is pulled first which causes a small delay before the round actually leaves the chamber.

Although it is actually more accurate than its NATO counterpart, as a result of these downsides the Zubr makes for a very poor sidearm in comparison to every other handgun. Unless absolutely necessary or if there is a lack of any better alternative, it should never be utilised as a sidearm for combat troops.

The Zubr only accepts a single magazine type. It has a "mass" value of 4 units:

Cylinder with 6 rounds worth of .45 ACP ammunition. Does not contain any visible tracers.

A teaser screenshot featuring the Zubr being reloaded, shown prior to release of the campaign's first episode.